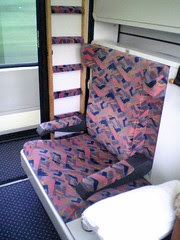 Perhaps it is a mark of how cheap some of the hotels I stayed in were, but the third most comfortable accommodation in Turkey or Greece on my recent trip was the Thessaloniki to Istanbul sleeper train "Friendship Express" (Dostluk/Filia Ekspresi). The train is run by Turkish railways (with the national crest etched in each window). It leaves Thessaloniki (Selanik), Greece, about 8pm, taking 12 hours. The route is Thessalonik, Kiklis, Rodopolis, Serres, Drama, Xanthi, Komotini, Alexandroupolis, Pythion, Uzunköprü, Pehlivanköy, Alpullu , Istanbul and is an excellent tourist trip. 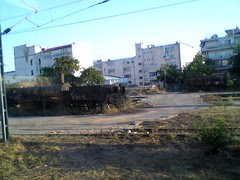 The train has air-conditioned one or two person sleeping compartments. There are no sit up compartments and so the only seats are the ones in the sleepers which convert into bunk beds. In theory the train is non-smoking, but a cabin full of smokers was tolerated by the conductor (the compartments have individual air conditioning controls and opening windows and so this was okay).

There is no dining car on the train and the only food and drink was some sandwiches, soft drinks and canned/bottled drinks sold by the conductor (in what seemed to be an unofficial entrepreneurial activity run from a supermarket shopping trolley). 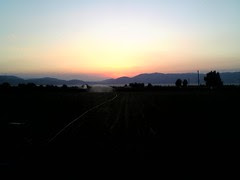 The two person compartments have two very wide comfortable seats, a wash basin (with mirror and power points), cupboard, bar fridge and luggage rack. The conductor brings sheets and pillows as the train is leaving, with the passengers are left to make their own beds. The fold down top bunk is easy to set up and there is a ladder for climbing up. 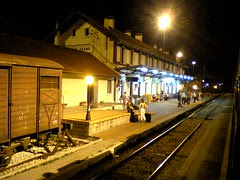 The carpet of the compartment looked like it was new and the fittings were a little warn but very clean and everything worked. This contrasted with most of the hotels I stayed in in Greece and Turkey, which were dirty, with broken non-working fittings. While small, the compartments are well designed so that everything fits (unlike hotels with poorly laid out fittings). The decision to fit a bar fridge seems an odd one as it dictates the cupboard it is in must be very deep and so takes up about one third the available floor space in the compartment.

There is a toilet at each end of the compartment and, apparently a shower (I didn't try it). The highlight of the train are the large windows (with an opening section at the top for ventilation. The fist few hours of the trip (and last few) and in daylight, providing excellent views of the Greek and Turkish countryside. Even after sunset it was possible to lie in bed and look out at the light of towns and moonlight on the countryside.

The ride is very comfortable and the carriages must have excellent shock absorbers. The last portion of the trip is on the same line used by the old local Istanbul suburban train which rattles and bumps along, in contrast to the express. Apart from the lack of luxury add-ons, the train is as comfortable as the Indian-Pacific. Being able to lock the door, brush your teeth, set the air conditioning and e down looking at the passing lake in the moonlight was blissful.

The quality of the train is let down by the poor customer relations and management. Turkish State Railways (TCDD/DDY) has a difficult to work web site, which is reported to only work with some browsers. The Thessaloniki station has only one ticket window for international bookings and this seems to be open odd hours and unattended much of the time when it is supposedly open. I looked over the attendant's shoulder as they made my booking and they seemed to be using a very user friendly web based interface, which makes me wonder why that is not available to the customers directly.

The train makes two customs/passport stops at about two AM. The frist stop is for Greek customs and is relatively painless. Your passport is collected and taken away. Some time later the official knocks on the door and hands back the passport after looking you up and down.

The catch is that after the train starts and you have started to get back to sleep, the train stops again at Turkish customs. An official again takes your passport. Citizens of some nations, including Australia, are required to purchase a visa, which requires leaving the train and walking across the tracks to the office and lining up. An acquaintance told of how the fell down from the high train step half asleep, injured themselves and received little help. Fortunately I had already obtained a visa on the way into Turkey and so did not need to alight; there was just a visit from the customs officer to look at our bags in the compartment. If planning to travel on the train it would be worth getting your visa in advance.

Perhaps this customs system is needed for non-express trains, where people can get on and off trains at intermediate stations and an hour's hold-up does not add much to the journey. But it does not seem to make a lot of sense to subject the passengers of the premium express train like this. It should be possible to have some of the formalities done at either end of the journey and for the officials of both countries to broad the train and carry out their checks in transit.

Apart from the stops for customs, there were some other stops of 20 minutes or so waiting from stopping trains to clear the track. Along much of the line on the Greek side, there was track work underway to replace the old steel sleepers with concrete ones and with new tunnels. The new track seems to have the curves banked at an angle for high speed trains, to the point where it was noticeable against the horizon (about the same tilt as I experienced in a Swedish X2000 tilt train). It seems likely that the speed of the train will be able to be increased considerably when this track work is finished. However, the quality of the track dropped considerably in Turkey and there were few signs of upgrades there.
Posted by Tom Worthington at 2:44 PM

hello, ı am planning to go thessaloniki from istanbul by train.I will take this trip alone.As a lady ,is there any problem ? please tell me the cheapest accomadation in thessaloniki..thanks a lot

"... planning to go thessaloniki from istanbul by train.I will take this trip alone.As a lady ,is there any problem ?"

Let the staff know when you are booking. They try to put families and single women in a separate carriage from the single men.

Also make sure you have a visa in advance, if needed, so you do not have to get off the train at the border. In the middle of the night this can be very unpleasant.

"... please tell me the cheapest accomadation in thessaloniki"

I stayed at the Hotel Rex Thessaloníki, which is a block from the station. It was being renovated and should be good now.

Apart from that, try the Lonely Planet Accommodation Guide

You mention the train Turkish website is a nightmare for foreigners to handle (I tried it) so what do you recommend to purchase tickets in adavance to go from Thessaloniki to Istanbul? I've read I should get my tickets for a sleep compartment at least a week in advance. How did you do it ? (any info is welcome)

Going from Athens to Istanbul to take a cruise, how long does it take to get there? can I get off a plane in Athens, hop on the train to Thessaloniki, purchase ticket for overnight train to Istanbul and make it on time ? (IC train leaves Athens at noon).
Any other way to get those tickets in advance other than right on the spot?

The Dostluk or Filia Express (Dostluk Ekspresi, Εξπρές Φιλίας), from Istanbul, Turkey to Thessaloniki, Greece was terminated in early 2011. This was due to Greek government cost cutting, according to "Greece severs international links" (International Railway Journal, March, 2011). This is unfortunate as it was a good service for tourists.

The "Man in Seat 61" suggests Istanbul to Sofia by overnight train, then the afternoon train from Sofia to Thessaloniki. This appears to use the same carriages as I traveled in on the now discontinued Thessaloniki-Istanbul service. https://www.seat61.com/international-trains/trains-from-Istanbul.htm#Istanbul_to_Athens