In the 2022 Australian election campaign, the Australian Liberal Party has proposed an "Autonomous undersea warfare capability for Australia's navy" as part of its electoral platform (5 May 2022). The Liberal Party lost the election, but there is merit in the new government implementing this idea. Rather than a purely autonomous craft, I suggest optionally crewed submarines, with the ability to carry about seven people (three crew and four special forces passengers). Australia could acquire a dozen such submarines and two submarine tenders to support them, for the cost of one Collins size boat. This would also ease staffing, as the submarines would require far fewer crew.

The proposed submarines would be eXtra Large Autonomous Underwater Uninhabited Vehicles (XLAUVs), designed to operate in Australia's large maritime region. These could be developed using an engineering approach similar to that of the SpaceX Dragon spacecraft. SpaceX took the approach of first proving an uncrewed cargo version of their spacecraft, before adding manual controls and seats. With a submarine this would allow for more rapid development and operational use.

Such a small craft could be used for the same primary roles as a full size submarine:  surveillance, deployment of mines, and delivery of special forces. They would not be carry large conventional torpedoes, for a direct attack. However, they could deploy self-propelled smart mines in this role, with the submarine leaving the vicinity before the attack, to increase its chances of survival.

Mini-subs, such as the Cosmos-class submarine, are about 110 tons, with a complement of 14, allowing for 6 crew, and 8 special forces passengers. XLAUVs under development are about half this size. They would be able to be operated with a smaller crew, as the autonomous systems would require less manual supervision.

XLAUVs and mini-submarines have a shorter range than conventional and nuclear submarines. The range can be extended by the use of submarine tenders, to refuel, rearm, and exchange crews, closer to the area of operation. The tenders would be able to be designed and made in Australia, derived from Australian stealthy warship and fast military transport ship designs developed for the US military.

Posted by Tom Worthington at 11:33 AM No comments:

You know you are getting old, when the most exciting thing happening is an invitation to test your balance at a Senor's Expo (Thursday 26 May 2022, at Exhibition Park in Canberra). Canberra is having its Seniors Day, with 200 booths. As it happens, I was lunching with Roger Hausmann today at Badger & Co (Australian National University), who mentioned the Balance Mat, will be on display at the expo. The idea is you stand on the mat, sensors measure the pressure changes from your feet, and a computer provides an analysis of your balance. Dr Maryam Ghahramani, from University of Canberra is researching the use of the data for diagnosis.

Posted by Tom Worthington at 4:20 PM No comments:

Art by the Canal 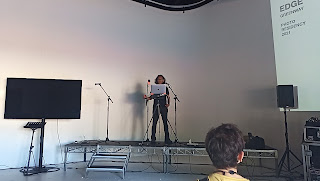 Greetings from Inner West Edge, an art festival in Sydney. Set up between a film studio and a canal are a series of shipping containers, each with an artist, making, collaborating, and performing.
Posted by Tom Worthington at 1:21 PM No comments:

I was surprised to get a note from the publication Lifewire, to say I was quoted in their article on Paramedics in Jet Suits (Mayank Sharma, April 1, 2022):

"[A] one person drone might be more useful. The paramedic could strap the patient in and have it fly them to safety, then return empty [for the paramedic]," Worthington wrote on Twitter.

Which I did, but I was bemused to have this summarized as "Tom Worthington, an independent educational technology consultant, thinks the whole idea is bunkum". I can't recall ever using the word bunkum. ;-)

Posted by Tom Worthington at 9:57 AM No comments: 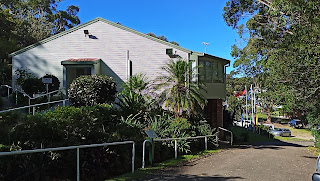 Greetings from the Port Stephens Community Arts Center, at Nelson Bay, New South Wales, Australia. The meeting rooms of the center are named after Australian warships, with the shield of each ship. It turns out that during WWII this was the sick bay for HMAS Assault, a training center for amphibious warfare. A "stone frigate" in navy jargon, the building is actually made of wood, as many hastily constructed military building were, but is in remarkably good condition. The art of amphibious assault was revived by the ADF a few decades ago,  with the acquisition of specialized ships.
Posted by Tom Worthington at 10:34 AM No comments:

The Australian Liberal Party has proposed an "Autonomous undersea warfare capability for Australia's navy" as part of its electoral platform (5 May 2022). Unlike many political promises, this is a very detailed proposal for the Defence Department and the company Anduril. Interestingly the Australian arm of the company was formed only a month ago, and the parent company in 2017, and appears to have limited experience building large long endurance robot submarines.

The proposed submarines would be eXtra Large Autonomous Underwater Uninhabited Vehicles (XLAUVs). These are the size of crewed mini submarines used in WWII, and can cross an ocean, thus suited to operation in Australia's large maritime region. Unlike smaller torpedo sized AUVs, the XLAUVs can't be launched from a submarine, and would normally be supported by a specially fitted out submarine tender vessel. However some US nuclear submarines have the capability to carry an external cargo, and may be able to transport a XLAUV covertly to its launch point. The XLAUV may in turn launcher smaller AUVs, and  UAVs, as well as conventional torpedoes, mines, and missiles.

XLAUVs are conceptually similar to the Boeing MQ-28 Ghost Bat UAV aircraft being developed for the RAAF. The ADF would need to develop tactics and train personnel for operating this equipment and learn how to use it effectively, at the same time it is developed. Support personnel, and equipment would also be required. In the case of the XLAUV surface ships would need to be acquired, built, or adapted in support. Oil industry support ships, which the RAN now has two of, may prove useful in this role. Australian designed fast ferries could also be used to deploy and replenish the robots.

If development proceeds well, the XLAUV may render the proposed Australian nuclear submarines obsolete even before they are ordered. The XLAUVs would be superior in the surveillance role to a nuclear submarine, being more stealthy. They would also be superior to deny large ocean areas via the threat of attack. They would not be able to provide as heavy conventional salvo attack as a larger submarine, however, that is not a role Australia is likely to require. In geopolitical terms XLAUVs may have an advantage by not appearing as threatening  as large nuclear submarines, while actually being militarily more useful. Australia could support and supplement the robot submarines with a small number of conventionally powered, crewed boats, such as the Korean KSS-III.

Posted by Tom Worthington at 8:25 PM No comments: