The Australian Computer Society has released "Blockchain Challenges for Australia". This is a technical whitepaper produced after a workshop at the new ACS HQ in Sydney.  I contributed to the section on blockchain for education and will be speaking on "Mobile Learning with Micro-Credentials for International Students", at EduTECH in Sydney, 4pm 6 June 2019.

This is the third in a series of ACS Blockchain reports. The first was "Blockchain 2030: A Look at the Future of Blockchain in Australia" prepared by CSIRO (April 2019), and "Blockchain Innovation: A Patent Analytics Report" by IP Australia (November 2018).


"Bitcoin gave birth to the blockchain technology ten years ago. Blockchain promises to disintermediate interactions between individuals by offering security of exchanges without relying on a central authority of trust. As a result, blockchain has been trialled in various sectors ranging from finance and insurance to energy.

A decade later, Australia is at the forefront of blockchain technology in terms of regulation, research and industry applications. Among many achievements, its standards organisation has been chosen to lead the secretariat of blockchain standards for the ISO; ARC-funded research has produced one of the most scalable blockchain systems; and the World Bank chose an Australian bank to implement the first blockchain-based bond.

Yet, blockchain poses significant challenges that prevent Australia from fully exploiting its promised benefits for our economy and society. This technical white paper identifies some of the predominant challenges for applying blockchain technology in different contexts in Australia and proposes technical directions to overcome these.

The directions that this technical white paper explores for solving these challenges include the analysis of use cases; the education of key actors; the exploration of blockchain development, especially surrounding consensus; and further understanding of regulations. They specifically include assessing the requirements for each use case in terms of speed, volume, scalability and security, in order to identify the most appropriate blockchain proposal for a given application. They also include a roadmap to help
technical and legal professionals interact on specific topics."

From: Blockchain Challenges for Australia, ACS 2019.

Posted by Tom Worthington at 11:41 AM No comments: 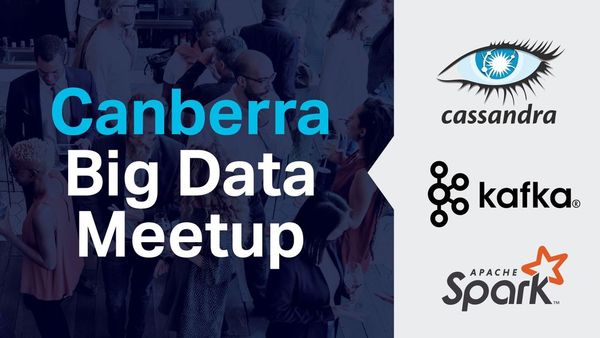 Greetings from the Canberra Big Data Meetup, on High throughput ingestion of time series data. This is at the Canberra Innovation Network/E29 offices. The first talk was by, Jordan Braiuka, from the host for the event, Canberra company Instaclustr, on using Cassandra to store 1 million metrics a minute. Not to be outdone, Mike Leonard, from Reposit Power (also a Canberra start-up), talked about ingesting 12 Million Data Points per Hour with OpenTSDB.

Instaclustr monitor servers, and Reposit Power the batteries in people's homes, but from a data storage point of view these are similar. The emphasis here is on being able to store large amounts of data quickly, and be able to query it for standard reports. For today's IT professionals, brought up with relational databases, the concepts used to do this efficiently will be novel. However, for someone like myself, trained in the mainframe pre-relational era, it is all very familiar. It is good to see there are modern tools to implement these decades old techniques, and proponents using them.
Posted by Tom Worthington at 7:41 PM No comments:

Saturday night I attended "Pygmalion", at the New Theater, Newtown,  Sydney. This is not My Fair Lady, and is more Weill than Lerner and Low, set in a smoggy, dangerous, grimy London.

Much was made in the promotion of this show about it being set Steampunk style. The costumes are striking, with characters adorned with assorted old odd items. Some characters reminded me a little too much of "The Doctor's Wife" episode of Dr Who. But it is worth seeing this show just for the costumes. Hopefully they will be preserved.

However, the upper-class characters were still allowed to look suitably fashionable. But, what stuck me more was how tall they looked. I spent the first thirty minutes trying to work out if it was some trick of false perspective in the set design, if the cast were on stilts, or they were just very, very, tall. After that I gave up wondering, and just enjoyed the show.

The elaborate costumes, and a few pieces of furniture, contrasted with a muted abstract set. The New Theatre doesn't have the space, or budget, for elaborate set changes, but I would have liked a little more detail and color on stage. Also I have seen a little too much of the same steel mesh ramp in New Theatre productions. 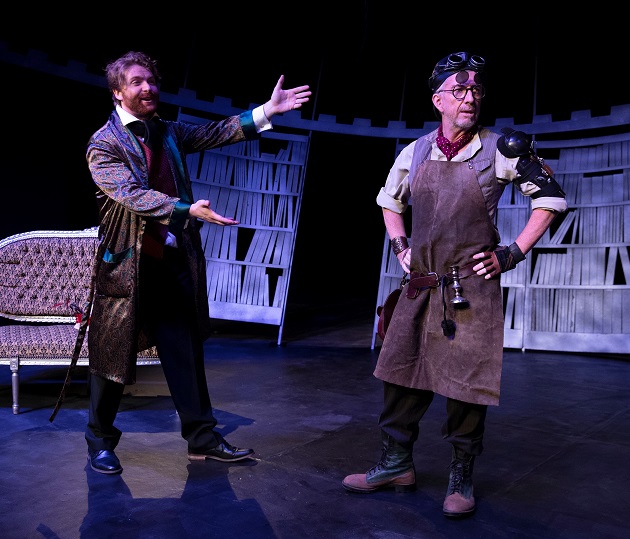 For me Mr Doolittle stole the show, with a menace underling his friendly cockney banter. Clara and Freddy were suitably upper class twitish.

The lead performances were good. However, Pickering seemed to be being played by someone channeling Kenneth Branagh, with too many flicks of the mop of hair. Eliza's flinching whenever Pickering touched her was very effective, as was her girlish glee at chocolates, contrasted with a later steely determination.

The play retains its relevance as social commentary. Especially in the middle of an election, where both our major parties are offering handouts to the middle class, but next to nothing for those on Newstart allowance, treatment of the "undeserving poor" is unfortunately very relevant.

Pygmalion is at the New Theater, Newtown, in Sydney, until 25 May.

Posted by Tom Worthington at 11:07 AM No comments: