On Saturday I took my first ride on Canberra's new light rail system. The trams work, are fast, and reasonably comfortable, but some improvements need to be made to the information systems, and the safety of the network.

In late March I suggested to the Minster and Transport Canberra, some improvements for the safety of Canberra's trams. Here is the reply:


"Hi Tom, thanks for contacting us.

Once the ATP technology is developed for light rail/tram systems it is expected most operators across the world will examine whether it is suitable and required for their networks.

In my view it would have feasible to at least install automatic stopping at stop signals for the trams, given far more sophisticated automatized systems are provided by the contracts in Europe.

Neither TC nor the Minister replied to my suggested upgrades to pedestrian crossings. However, one safety improvement I did notice at the  Macarthur Avenue stop, was a large retro-reflective sign "< LOOK>" had been painted on the pedestrian crossing. This is well placed to be seen by people looking down at a mobile phone while walking. However, the yellow sign is not as easy to see as you would expect. These signs are normally applied to a black road surface, and are harder to see against the gray concrete of the tram line. I suggest the signed be given a dark background, to increase the contrast.

The electronic signs at the stop proved to be confusing. These display the last stop on the line in large letters with a number next to it: "GUNGAHLIN PL 6". Another passenger asked me if this was the right platform for Gungahlin, and it too some time to work out what the sign meant. After a few seconds under this in small letters appeared "TO: Gungahlin 23 min". As the trams were supposed to be running every 15 minutes this made no sense. Then the large digit changed to "5" and I worked out this was a countdown to the next tram, and the smaller display was the one after that.

The tram arrived as per the sign, and I got on to what was a moderately crowded service. Even so I was able to get a seat. The trams are very similar to those on the Sydney and Newcastle lines. The ride was much less smooth than the older Newcastle line. The tram swayed from side to side, jerked over bumps, stopped and started with a jerk, and squealed around the corner at Epic. This is surprising for a new installed system. At one location I noticed what appeared to be welding metal left on the track, which may have added to the bumpy ride and indicates poor instantiation and testing of the track. Also at one point in my travels, the tram stopped suddenly, sending standing passengers sprawled onto the floor, fortunately without any apparent injuries.
not as
I alighted at Well Station Drive stop. Unfortunately the pedestrian crossing at this stop only has the "< LOOK >" sign on the road side of the crossing. It would be very easy for someone to step off the tram, and under the path of a tram coming the opposite way. I suggest "< LOOK >" be added to all crossings.

The Green Shed had posted to Facebook, pointing out there was now a stop near their second had store at the Mitchell Resource Management Centre (aka "The Tip Shop"). The information sign at the tram stop directed me to the center. However, I could not find a footpath from the stop to the center. Worse still, the bicycle path which previously ran beside the road was moved to the roadway, and the previous path plowed up. I watch as someone tried to pull their wheeled shopping bag over this broken path. I suggest the path be repaired.

I continued my journey to the stop at the end of the line: Gungahlin Place. As the doors opened, a flustered transport officer told us to alight from the other side of the tram. This was confusing as an announcement had just told us to use either side. The staff were having difficulty coping with the large number of passengers, and had sensibly decided to have them enter one side, and exit the other. But the onboard system needs to be changed to say this. Surprisingly, the pedestrian crossing here at the terminus was also not well marked. My return journey was uneventful.

The next day I took the tram to Civic. One pleasant surprise was a new coffee shop, "The Coffee Store", at the corner of David Street and MacArthur Avenue, a short walk from the tram.

The Civic terminus was not as busy as Gungahlin had been the day before. I noticed temporary barriers at the end of the platform, and at the crossing, to stop people walking into danger. I suggest these should be replaced with permanent barriers, and extended along the approaches to the platform. There was a passenger sitting on a raised concrete plinth next to the platform, with their legs dangling over the track. A transport officer quick, politely, but firmly told them to move. However, I suggest a barrier needs to be placed at this point, to stop passengers, deliberately, or accidentally going on to the track. Also I suggest fencing should be installed at the approaches to all stops, and crossings, to deter waling across the track. This could be progressively extended, until the entire route, from  Civic to Gungahlin is fenced.

The tram works, and will be an asset to Canberra. However, it does not work as well as that in Newcastle.
Posted by Tom Worthington at 10:17 AM No comments:

My first payment from Amazon was ten years ago. Unlike Google, which pays by bank transfer in Australian Dollars, Amazon still sends old fashioned paper cheques, in US dollars.  Banks charge a considerable amount to deposit a foreign cheque, so I have the system set to only send one when the balance is high enough to make it worthwhile. So I was surprised to receive a cheque this week for fourteen cents.
Posted by Tom Worthington at 5:03 PM No comments:

Greetings from the Australian Computer Society's (ACS) head office in Sydney, at the launch of the report "Blockchain 2030: A Look at the Future of Blockchain in Australia". Speaking at the launch, ACS President, Yohan Ramasundara, likened blockchain to a fifth generation fighter being launched from the deck of an aircraft carrier into a turbulent sky. Ed Husic, Shadow Minister for the Digital Economy, was not wearing a green jacket (as those who launch carrier aircraft do), but launched the report. His main message was that we should not have to play catch-up on tech, such as blockchain.

This is the second report on Blockchain, from ACS. The first report was by IP Australia, the second (today), is by  CSIRO.

One interesting question for the panel was what would be the effect of quantum computing on blockchain. Australia is a leader in both technologies. Unfortunately the panel did not have a clear answer.

ps: I am on the ACS Blockchain Committee.


'Blockchain technology is a distributed ledger technology whereby a database is distributed across numerous users, and changes to the database are validated by consensus among the users. While it is best known as the platform
for Bitcoin, blockchain technology can be widely applied to improve business processes, increase transparency, and drive the creation of new jobs and industries.

Over the last decade, blockchain technology has grown in popularity and use, and has already begun to disrupt existing markets in Australia and around the world. The opportunities blockchain presents have been invested in, studied, explored, and considered, in almost all sectors of the economy. Blockchain has attracted significant public and private investment, and introduced previously non-existent products and services across multiple industries.

Despite its potential, there is significant uncertainty regarding future adoption of blockchain technology in Australia. For instance, there are unknowns around blockchain’s capacity to work at scale while remaining decentralised, and protect confidentiality whilst also being transparent. The extent to which the public will trust decentralised systems is also uncertain. These uncertainties raise the question: can blockchain progress beyond the hype to deliver tangible, high-value applications and a thriving industry for Australia, or will blockchain amount to little more than a market bubble?' 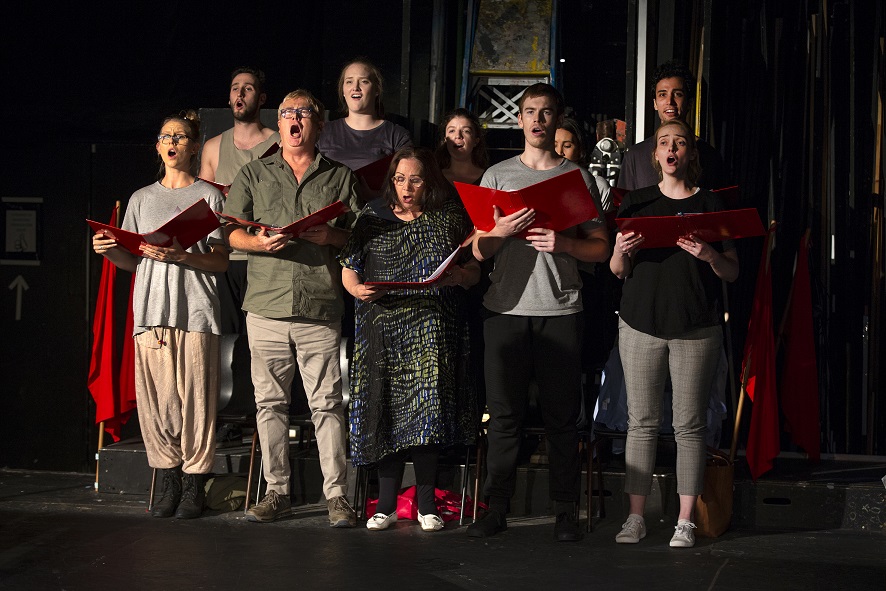 Michael Gow’s autobiographical play "Once in Royal David’s City" deals with the death of his mother.

The surreal elements of the play reminded me of Dennis Potter's, The Singing Detective for the BBC. Characters suddenly spotlighted burst into song*, or mimed to the sound of other actors. Characters explain to the audience what the next scene is, and interact with cast members sitting in the audience.

I am wary of any playwright getting autobiographical, and Gow is more self indulgent than most. However, this can be forgiven, due to the excellent performances in the New Theater production, particularly Alice Livingstone, as the dying mother.


* At one point the play gets a bit Reds. But a crowd spontaneously bursting into a revolutionary song is something I have seen happen in an Sydney Inner West pub. ;-)
Posted by Tom Worthington at 6:13 PM No comments:

Posted by Tom Worthington at 10:33 PM No comments: