Greetings from the Australian National University in Canberra, where a panel is speaking on "Will the NEG transform Australia's energy landscape?".

First up is Mr Shane Rattenbury, ACT Minister for Climate Change and Sustainability.  Minister Rattenbury was one of the recipients of a letter today, from 23 energy researchers: "Call for Full Release of National Energy Guarantee Modelling". He pointed out that the National Energy Guarantee (NEG) will not reduce emissions significantly more than "business as usual". Also there will be a considerable number of coal plants reaching their design life just after 2030, requiring to be replaced.

ps:  Professor Jotzo and Dr Saddler agreed that the NEG was not a lot better than "business as usual". Katharine Murphy, looking at the political aspects, suggested the NEG could be useful, not because it achieves any fundamental reform, but primes the political process for something more ambitious.
Posted by Tom Worthington at 5:52 PM No comments:

Blockchain: What is it good for? 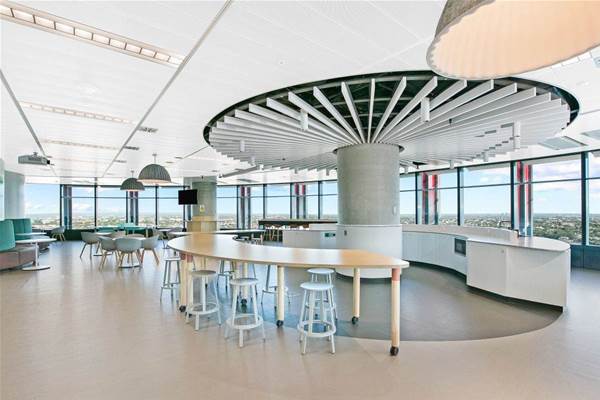 Greetings from the Australian Computer Society's new headquarters in Sydney. I am taking part in a workshop, as a member of the ACS Blockchain Committee. It is a little hard to focus on the details of what advice we should provide Australian government, industry and community on the how and why of blockchain, due to the view. The new ACS office is on the 27th floor of a building on the Sydney waterfront, with panoramic views all the way to the Blue Mountains.

Getting back to the workshop,  ACS has published a series of articles on blockchain. We have a mix of technologists, lawyers and industry people in the room, working out what the issues are. As an example, what are the issues in using blockchain in education?

Posted by Tom Worthington at 11:42 AM No comments:

Uluru Statement from the Heart on Wikipedia

I was surprised that the "Uluru Statement from the Heart" did not have a page in the Wikipedia, so I have added it for NAIDOC Week.

"... We seek constitutional reforms to empower our people and take a rightful place in our own country. ...".

Posted by Tom Worthington at 10:05 AM No comments:

Greetings from the Australian National University, where Michelle Grattan is asking Katharine Murphy about her new book "On Disruption".

This is a short 121 page, A6 size pocket book, which is very readable. This is a bit Zen and the Art of Motorcycle Maintenance, being in part a personal reflection on becoming a journalist and part on the nature of political discourse in the age of the Internet. It starts "It was the fag end of summer and I was decked out in a new linen threepiece suit from Sportscraft."

Michelle Grattan asked about the story of the week with Senator Leyonhjelm's comments about Sarah Hanson-Young. Katharine Murphy commented that women have decided not to accept such comments any more.

One question from the audience is where does the money come from. Katharine Murphy replied that The Guardian has a membership scheme, rather than a pay-wall. This is curious as in effect, the for-profit company takes donations like the pay-what you can Lentil as Anything
restaurant in Sydney.

The thesis of the book is that the Internet has "disrupted" journalism, in the same way Uber disrupted taxis. The problem is not knowing where all the information "washing around" the Internet came from "... perhaps someone in a basement in Moldavia".

Last month the "Father of the Internet", Vint Cerf, talked at the Australian National University in Canberra. Australia has had Internet access for thirty years, about ten years after the US development.
Posted by Tom Worthington at 6:22 PM No comments:

IT Changes Everything in Sri Lanka

I am scheduled to speak at the National IT Conference in Sri Lanka (NITC 2018), 2 to 4 October 2018, organized by the Computer Society of Sri Lanka (CSSL). The theme of the conference is: IT Changes Everything.
To help me prepare a presentation, the conference organizers have provided some references as background, from which I have extracted some quotes:


"... This initiative will strategize the promotion of the Digital Economy through the lens of three economic development thrust sectors, namely, agriculture sector, tourism sector and the manufacturing sector. It is expected that each of the sectors identified above will could develop at least one flagship programs to support this initial stage of Sri Lanka’s Digital Economy Strategy. ..."

"The country needs to develop strategies that encourage the use of digital and other emergent technologies to become globally competitive and to drive the nation towards a digitally empowered economy. Enhanced digital ecosystems, through reduced transactions costs, will stimulate inclusive growth and job creation, especially by empowering the self-employed and SMEs.

...  Sri Lanka’s IT literacy rate was a meagre 27.5% in 2016, with only 15.1% of households with internet access. The technology service sector has long been dominated by ICT, and there is little focus on promoting disruptive innovation technologies such as artificial intelligence (AI), data mining and other high-quality technological services. The economy needs a shift towards innovative, knowledge based business ventures.

I was then asked to:

"1. Outline your topic and it's relevancy in-line of the overall theme of "IT changes everything"
2. How do we drive a digital economy? What should be the key measurements? Timelines?
3. What changes are needed at different levels of the society? E.g. how do you propose we change the current education system?
4. What are you looking forward to during you planned visit to Sri Lanka during early October for NITC?
5. Any other info you think which is important."

Framing the digital strategy for a nation is too much for one conference presentation. As an educator, I will naturally focus on education. The area I have been looking at in Australia and for the Asian region in my graduate studies has been vocational education. How do we bridge upper schooling, vocational colleges and university?

What are you looking forward to?
The easiest question to answer is "What are you looking forward to during you planned visit to Sri Lanka...". On my previous visit I enjoyed meeting people from the local IT industry and educational institutions. Highlights were a visit to a higher education institution which has connections to Australia and a IT company campus (where I gave a talk on emergency management using the Internet).
Posted by Tom Worthington at 11:06 AM No comments: