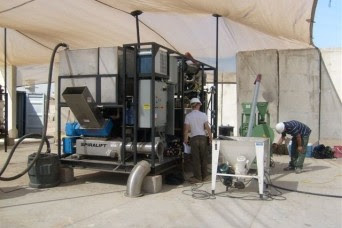 The US Army has deployed two Tactical Garbage to Energy Refinery (TGER) units to Iraq. These turn solid garbage into gas and then burn the gas in a diesel generator. The generator is started on diesel and then switched over to the gasifier when it has warmed up.

Descriptions of the system, developed with Purdue University mention another process for fermenting food scraps into alcohol for fuel, but it is not clear if that has been tried in the field. The gasification process is similar to that developed in the 1800s to make gas from coal, and used in WWII to make gas for cars.

Also there is no mention of using Biogas generated from sewage, which would be another potential energy source, as well as a material needed to be treated before disposal.

Posted by Tom Worthington at 4:44 PM