Posted by Tom Worthington at 5:42 PM No comments:

Andrew Johnson, ACS CEO just asked the delegates at the Australian Computer Society 2016 Conference to consider ICT in the world of 2020. In amongst driver-less and flying cars, Andrew asked if we would be able to provide Internet access to all the Australian population and have sufficient students with the required STEM skills.

It happens that I wrote "Canberra 2020: World Information Capital" for Informatics Magazine (September 1993), helped run the "Foundations of Open: Technology and Digital Knowledge Local 2020 Summit" for Senator Lundy in 2008 and wrote "Australian Higher Education in 2020" (2013). One thing I have learned from a previous attempt at future history, "Australia: The Networked Nation" (2005 from 1996), was how wrong such predictions can be.

Rather than just predict the future, I suggest ICT professionals are in the business of making the future. At a number of venues before the end of the year I will be speaking on the future of education, as it can be. This is starting with "Learning to Teach On-line with an E80 Blend" at the Australian National University, in Canberra, 7 September 2016. Other times, cities and countries to follow.
Posted by Tom Worthington at 5:14 PM No comments:

Computing is about people

Greetings from the ACS Canberra 2016 Conference.

Posted by Tom Worthington at 9:57 AM No comments: 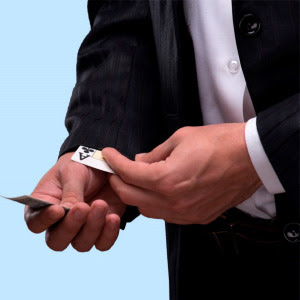 The play "House of Games" is set in a Chicago poker club, where it is hard to know who is conning who. Set in the present day, Kate Shearer plays a therapist drawn into this seedy world to help one of her patents.

Kate Shearer makes a very believable Harvard trained therapist, who's frosty exterior begins to melt.  The rest of the cast struggle with their American accents, although they are playing con-artists, so are they acting at sounding fake?

Set Designer John Cervenka's poker club perhaps need some neon "Budweiser" signs and more clutter, whereas the therapist's office is suitably minimal. Costume Designer Deborah Mulhall succeeds with the look of Chicago high and low life. Playwright Richard Bean, provides some humor (especially at the expense of bankers), but they play has an untidy conclusion, with a new character and at the end.

"House of Games" is on at the New Theater, Newtown Sydney, until 10 September 2016 (my ticket was courtesy of the New Theater).
Posted by Tom Worthington at 10:56 AM No comments:

Anthony described how he dropped out of university because he wanted to "build things" and went on to start several tech companies. He suggests that universities need to allow students to build and produce a portfolio of work.

ps: One advantage Australian university students have is that they can work in the USA for a year.
Posted by Tom Worthington at 1:34 PM No comments:

Droids Roll into Canberra Next Week

ps: The conference theme is Drones, Droids and Robots and Dr. Tim Turner Chairman of ACS Canberra, quipped in B2B magazine that Daleks were his first memory of a robot. But this is technically incorrect as Daleks are not robots, they are cyborgs: part organic and part mechanical. ;-)
Posted by Tom Worthington at 3:18 PM No comments:

In the RAND report "War with China: Thinking Through the Unthinkable" Gompert, Cevallos and  Garafola assume a regional conventional war, using ships, submarines, aircraft, spacecraft and also cyber-war. RAND is a US based think tank, which also has a Canberra Office.

The authors suggest that "Escalating cyberwarfare, while injurious to both sides, could worsen China’s economic problems and impede the government’s ability to control a restive population." (p. xiv). Also that "We also assume that China would not attack the U.S. homeland, except via cyberspace, given China’s minimal capability to do so with conventional weapons." (p. 11) and:


"In the future, cyberwarfare against military, dual-purpose, and civilian systems could figure importantly in a severely intense war. ... Whether with kinetic or nonkinetic (namely, cyber) weapons, the highest targeting priority for China would be U.S. strike platforms, bases, and force concentrations in the region." (p. 19).

Also the report warns that cyber-attacks could escalate to nuclear war:

The report warns of the cost of cyberwar and the difficulty of preventing it harming civilian systems which support military operations:


"Would both countries not be tempted to crash telecommunications or air-traffic control or energy-distribution systems that support fighting, or interfere with government-service networks?" (p. 49)

What this report fails to address is the effect of deliberate attack and collateral damage on other countries. Cyber-attacks are difficult to confine to one geographic area and will likely effect interconnected international systems and national and local ones well away from the conflict. In addition both sides may well make use of cyber-attacks on third countries, as a way to send a low risk political signal.

Posted by Tom Worthington at 10:49 AM No comments:

The security of government information systems is the responsibility of government ministers, not IBM or the ABS. What should be of concern is not just that there was a successful denial of service attack on the Australian Census, but the apparent lack of a planned and practiced response from the relevant government ministers and their staff. Had this been a more serious attack, such as one on critical infrastructure threating lives, the poor performance by ministerial level of government could have been disastrous.

At the senior levels of government there need to be plans in place for who says what and when. These plans need to be tested in exercises, just as is done for natural disaster planning, which Australian state and local governments do well. Internet Australia (IA) members are discussing what form of submission to make to the likely Parliamentary inquiries into this matter. I suggest the Australian Computer Society (ACS) join with IA on this and try to widen the discussion to cover Internet security more generally. ACS and IA need not agree on every aspect, buy could loosely coordinate, as was done for the Internet regulation inquiries of the 1990s, as  described by Chen (2000, p. 161).

Posted by Tom Worthington at 9:50 AM No comments:

I had a call from ABC Radio this morning about the ABS announcing they had suffered denial of service attacks from overseas.  Perhaps the ABS staff need to go down to the foyer of their building and break the glass on the display case, with the punch card machine in it. I used a machine like that thirty years ago to write programs for the Census and it worked fine. ;-)

But seriously,  keep in mind this is not a safety critical system: no lives are endangered. People can fill it in tomorrow, or the day after, or get a paper form. But the minister needs to be asked if sufficient resources were given to the ABS and were they allowed to use their preferred method of data collection, which would be surveys, not a census.


"Thank you for participating in the Census. The system is very busy at the moment. Please wait for 15 minutes before trying again. Your patience and cooperation are appreciated. [code 9]"

The Census error message web page is 117 Kbytes, with 49 Kbytes of Javascript and 52 Kbytes of CSS, which seems a bit much just to display a few hundred characters of error message. But presumably this code is cached and reused throughout (in which case, it is not too large). The CSS uses Pure v0.5.0 .

Posted by Tom Worthington at 7:34 AM No comments:

Time to Virtualise the NBN?


Sorensen and  Medina in "The End of Australia’s National Broadband Network?" (June 2016) deliver what some describe as a scathing assessment of the NBN. The Coalition Government first set out to build a copper broadband network for cities and terrestrial wireless for regional areas in 2007. Then a new ALP government canceled the contracts for the copper broadband, and also abandoned its own hybrid policy (2007), instead switching to FTTP fibre for cities. A later Coalition government then adopted the ALP's previous FTTN hybrid policy, scaling back the FTTP. This is hardly the first case in which a project is in difficulties due to political indecision.

The parts of the NBN which the politicians did not tinker with have gone well: the wireless for regional areas and satellites for remote. In my view the debate over FTTN v FTTP for homes in the city is of less importance, due to mobile broadband. It may not be worth installing fibre or copper for broadband to homes, as it is not homes where the consumer now wants the broadband, but on the mobile device in their hand.

Posted by Tom Worthington at 10:49 AM No comments: