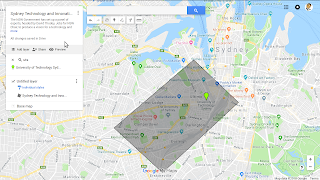 The NSW Government has set up a panel of experts, headed by David Thodey, Jobs for NSW Chair, to produce a vision for a technology and innovation precinct in central Sydney. The Sydney Technology Innovation Precinct will include Ultimo, Central Station, Redfern Station, Eveleigh Rail Yards, to Camperdown. This area includes University of Technology Sydney and the Australian Technology Park (ATP). This is a roughly rectangular area of about 7 square kilometers of the inner west of Sydney. The deadline for submissions is 10 September 2018.

In my closing address to the 1998 Information Industry Outlook Conference, in Canberra I proposed using the Cambridge model for Australian innovation precincts.This has now been done in Canberra, next to the ANU.
Posted by Tom Worthington at 2:37 PM No comments:

EduTECH Asia in Singapore 8 to 11 October

EduTECH Asia is on 8 to 11 October 2018 at the Suntec Convention and Exhibition Centre in Singapore. I am speaking on Decreasing Campus Energy Use With Flexible Classrooms and e-Learning in the new EduBuild stream on 9 October and the next day taking part in a discussion of "Learning to use new  tech-infused teaching spaces". There are also some free activities and exhibition.
Posted by Tom Worthington at 1:49 PM No comments:

Opening the Australian Computer Society conference at the Hyatt Hotel Canberra this morning, Mr Yohan Ramasundara, ACS President, called for an expansion of Australia's local defence industry. Mr Ramasundara pointed to Austal as Australia's only commercial company with the capability of designing and building warships locally. He suggested that Australia should aim to design and build locally warships on the scale of the Canberra Class LHDs, which were built in Spain and then transported to Melbourne for completion.

I will be speaking at the conference at 1:15pm, in the security stream, on m-Learning from Canberra for the Indo-Pacific and how this can complement China's Belt and Road Initiative.
Posted by Tom Worthington at 10:05 AM No comments: