Greetings from the Australian National University in Canberra, where Dr Julio Friedmann, Senior Fellow, Lawrence Livermore National Laboratory, is speaking on The Importance of Innovation to Global Clean Energy Development, Past and Future. Dr Friedmann spoke of how there is a glut of hydrocarbon energy available, but also face climate change. He described the Kyoto Protocol as "Mutually Assured Destruction", but praised the Paris Agreement (COP21)in more positively. In the long term global emissions per person need to reduce to that of someone in Zimbabwe, while aiming to improve quality of life.

Dr Friedmann pointed out the USA has a network of government laboratories working on energy. He also pointed out that Bill Gates, and other entrepreneurs, are contributing capital to long term high risk venture (Breakthrough Energy Coalition), to provide an example to the private sector. To summarize this Dr Friedmann said policy drive finance which then encourages innovation. That is certainly one possible approach, but I suggest this is not the way we got the Internet or the World Wide Web. Both were directly government funded inventions (the Internet by US DoD and the Web European pure science budgets). Only after development with government funding were the Internet and web commercialized.

However, what seems to be missing from Dr Friedman's analysis are political and social aspects. We already have technological and financial solutions to climate change. However, these solutions are politically and socially unpalatable. By offering the prospect of technological fixes in the future, researchers may delay the implementation of proven but difficult solutions.

Hi tech solutions do not always solve real problems. Dr Friedman gave the example of the testing of aircraft using simulations. However, simulations have limitations. As an example, the launch bar on the F-35C did not lower far enough to hook up to the catapult for launch and the tailhook did not catch on the arrestor wire on the first test. What was needed was not a computer, but a large hammer.

Dr Friedman ended by talking about the need for and possibility of Carbon Dioxide to fuel conversion. This seemed to me an excellent example of what not to do. The problem is to fine an energy source which does involve the burning of carbon as this produces carbon dioxide pollution. Synthetic carbon based fuel can be used to store and transport energy in a convenient fuel, for transport, but will not reduce carbon emissions. Making synthetic fuel will require net energy input. where there are no alternatives, such as for aircraft, synthetic fuel will be an option. But for land transport, there are alternatives such as public transport to replace private cars and freight trains to replace trucks. This requires sophisticated social and political action, rather than new engineering.
Posted by Tom Worthington at 5:48 PM No comments: 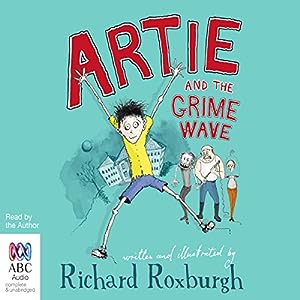 Yesterday I had the pleasure of attending a lunchtime talk by actor Richard Roxburgh at the Australian National University (ANU) in Canberra. Richard is an ANU economics graduate and now a children’s book author, in Canberra to launch "Artie and the Grime Wave

". He is best know for his role in TV comedy "Rake", as Cleaver Greene, a character usually claimed to be based on Sydney barrister Charles Waterstreet. Roxburgh asserted that this was untrue and the character was based on someone who drank at the ANU bar.
Posted by Tom Worthington at 7:02 PM No comments:

Greetings from the National Gallery of Australia where Michelle Price, Department of Prime Minister & Cabinet (currently at the ANU National Security College) is speaking on "Cyber security in relation to Australia’s energy security". This is part of an Energy Security Forum.

Dr. Price suggested talking about "critical services", rather than critical infrastructure. This is to focus on what people need, rather than poles and wires. For the first week of a disaster she suggested the Internet and electricity are all that are needed. I found this surprising, as I had assumed the HF radio systems Australian governments maintain would be sufficient for essential services. In 2015 the Australian Defence Force tested transmitting digital video via an Internet Protocol (IP) data link over Wideband High Frequency (WBHF) radio between Canberra, Townsville, Wagga, and an aircraft on the ground in South Australia.
Posted by Tom Worthington at 10:09 AM No comments:

While at UNSW Canberra today to borrow some library books, I noticed a display of electric and autonomous military vehicles. It is not that unusual as this is also the campus of the Australian Defence Force Academy (ADFA). One product was the Tomcar Military spec v4, with the electric drive option. This looks like a cross between a dune buggy and a golf cart and is made by the Australian company Tomcar.

The electric version is very quiet, which is useful for military operations. But I suggest it needs a synthetic engine noise which can be switched on to make it safer for everyday use, to warn pedestrians.

These type of military buggies, usuals with conventional diesel engines, are popular with the military, where their usual vehicles have become too big to be transported to the battlefield, to complex to be maintained and too expensive to procure.

Tomcar might consider making an articulated, or double articulated version. This would have the electric vehicle at the front, with a trailer for the crew. It would be narrow enough to be transported in a helicopters or small military transport aircraft. As the trailer would have no front wheels, it would be more resistant to mine blasts.

Posted by Tom Worthington at 5:13 PM No comments:

UAVs Over the Indian Ocean

The India and China at Sea: Competition and Coexistence in the Indo-Pacific Conference is underway at the ANU in Canberra. The topic of the role of aircraft carriers and submarines came up in the first session so I asked the panel if Unmanned Aerial Vehicles (UAVs), and Autonomous Underwater Vehicles (AUVs) would render large vessels obsolete, changing the balance of power in the Indian Ocean.

Within the next ten years, I suggest, countries in the region, including China, will be able to mass produce small, long range, low cost drones on the production lines set up for smart-phones and consumer appliances. India will be able to harness its skilled IT workforce to program their own drones manufactured in the new high hi-tech industrial corridors being built with Japanese funding.

These low cost robot aircraft and submarines will make make aircraft carriers and submarines as useful as the battleship HMS Prince of Wales, was for defending Singapore. This powerful ship was commissioned in January 1941, but sunk by aircraft in December 1941, two days after leaving Singapore.

One of the conference panel thought Chinese anti-ship ballistic missiles more of a threat than drones. The other panelist pointed out that India is the major customer for Israeli UAVs. With the signing of arms limitations agreements, India will be able to acquire armed UAV technology from Israel.

Much of the software developed for the UAV Challenge is open source. It is not difficult to imagine the same software being used for a flock of military UAVs to search the ocean for warships,  relaying the coordinates to a flotilla of armed AUVs. This is something a mid-level country, with IT and engineering graduates could implement.
Posted by Tom Worthington at 2:49 PM No comments:

Conference on India and China in the Indo-Pacific

Greetings from the Australian National University in Canberra, where the India and China at Sea: Competition and Coexistence in the Indo-Pacific Conference just opened. This is a welcome change from the events I have attended recently, which have a mid-Atlantic view, that the world revolves around Europe and the USA.

Posted by Tom Worthington at 9:50 AM No comments:

Stay the Night at an Australian University

Last year I stayed at Fitzwilliam College, Cambridge University (UK), while attending a conference. The booking was through "http://www.universityrooms.com/en/". They just sent a message to say they are also offering rooms at Australian universities. It would not be quite the same as an OxBridge college, but a night at a university provides a change from the typical hotel room.

In Canberra, there are rooms at University of Canberra, in Sydney at Sancta Sophia College and Melbourne Graduate House.
Posted by Tom Worthington at 2:00 PM No comments:

Greetings from the Australian National University, where Monique Morrow, from CISCO is speaking on "Changing landscape of a digitised world: Are you ready?". This is an interesting preview of the good and the bad of the digital future of work, education, government and culture. While thought provoking, one aspect worried me was that this was very much from a North American/European point of view, with just one mention of anywhere else (India). It would be useful to have a perspective, of the world's growing economies in Asia, Africa and South America, even Australia. On example is that Monique talked about the TV show "CSI: Cyber" and knowing the real person it is based on. There are also two hi-tech TV shows set in Canberra, with ANU used for some scenes: Secret City and The Code (some of the characters look familiar from my government work).
Posted by Tom Worthington at 6:58 PM No comments: