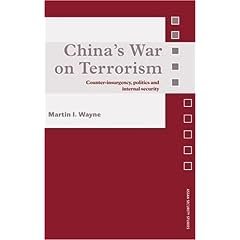 With the Beijing Olympics about to open, "China's War on Terrorism: Counter-insurgency, Politics and Security" by Martin I. Wayne (Routledge, 2007) is a timely analysis of the Chinese government's response to Islamic terrorism in northwest China (Xinjiang). While not underplaying problems with the Chinese government's human right record, Wayne has respect for their multi-level response to terrorism. In contrast to the approach of the USA which is to go after high profile terrorists, China has tackled the problem at at all levels, with political and policing measures starting at the grass roots community level. This is a book which should be read by all those interested in dealing with insurgency.
Posted by Tom Worthington at 6:46 PM

I feel pretty wary about Chinese claims of terrorism plots supposedly lead by the Uighur people, from the country’s Xinjiang region.

More recently, it has used the “war on terror" to suppress the Uighurs, calling them terrorists, separatists and religious extremists.