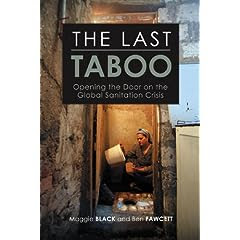 "The Last Taboo" (Maggie Black and Ben Fawcett, Earthscan, 2008) tackles the little mentioned, but important problem of sanitation in the developing world. The authors point out that this problem was largely solved in western countries more than a hundred years ago with the flushing toilet, but that system is not economically or environmentally feasable for most of the world. They also point out that most attention and resources about water-related diseases go to providing clean water, when it is the failure to correctly dispose of human excrement which causes the problem.

The authors detail and critique several designs of low cost and water saving toilets (pour flush pit toilet, double vault composting toilet,VIP Toilet, sanplat) and the programs developed to supply them. They are critical of projects which do not plan for maintenance of the systems and do not involve local people. They also advocate looking first to low cost solutions, based on behavior, not technology. As an example in rural areas they advocate an approach where people are educated to use a designated piece of land away from housing and simply bury their waste (in a "cat scratch").

I have one quibble with the book. At one point they discuss the benefits of separating urine from feces. They point out that urine contains much of the nutrients of the waste, while being almost free of pathogens and suggest its separate collection for use on crops. But they then point out that toilets designed to collect the urine separately are difficult to make, especially for females.

However, they don't suggest an obvious and simple solution: provide a urinal for males. Urinals are simple to make and maintain.They need not be complex waterless urinals which have been designed to look like a flush unit (some also require to be refilled with Sealing Liquid).

A urinal cab be as simple as a designated patch of ground, or a funnel and pipe. Males in many cultures are happy to use them, as satirized in the novel "Clochemerle". A urinal would divert about half the urine at minimal cost. In a communal facility it could also greatly increase capacity.
Posted by Tom Worthington at 1:38 PM