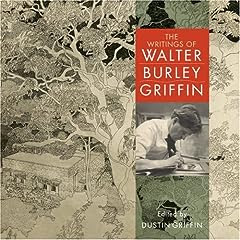 Marion Halligan's "Capital idea" (The Australian, July 12, 2008), is not so much a book review as a review of the work of the book's subject. The book referred to is "The Writings of Walter Burley Griffin", a collection of work by the architect of Canberra edited by Dustin Griffin (Cambridge University Press, 2008). About all she says of the Griffin's prose is: "often rather claggy, but there are pearls buried in it". Most of the review is actually about Griffin's architectural work, particularly the design of Canberra, and the way it has been treated by bureaucrats.

Griffin's work is steeped in legend. Exactly what was designed by him and what was by his wife (an architect in her own right) and by otehrs in his practice is debated. Exactly if such a distinction makes sense for an architect is also debated. As an example Halligan claims that one of the two constructions by Griffin in Canberra is an incinerator. However, a well researched article by the ACT Library and Information Services attributes the incenerator to Eric Nicholls. Walter Burley Griffin had formed a partnership with Nicholls in the early 1930s and Griffin's input is evident in early designs. However, the Canberra incinerator was built in 1937-38, after Griffin’s death. This lacks some of Griffin's design touches and is most likely the work of Nicholls.
Posted by Tom Worthington at 3:45 PM