Yesterday I attended a talk about the "Sydenham Station Creative Hub" at Batch Brewing Company. This is a proposal to form a creative precinct in the industrial area adjacent to Sydenham Railway Station, to the South West of Sydney's CBD. Council staff talked about the proposed precinct, followed by the brewers on the difficulties of starting a business, and a tasting of the brews.

Being initiated by local government, the Sydenham Creative Hub is essentially a land planning activity. It is proposed to keep the current general industrial zoning, while allowing restaurants, cafes, bars and businesses:


"... but only where the consent authority is satisfied that the business premises and/or office premises will be used for a creative purpose such as media, advertising, fine arts and craft, design film and television, music, publishing, performing arts, cultural heritage institutions or other related purposes...".

What seems to be lacking from the plan is any concept of how to attract or support businesses, apart from helping with planning approval. There do not appear to be any targets for the project attracting business. I suggest the project needs a plan, with a budget and a projection it will be revenue positive for the council within a realistic time-frame.

The Council might want to also involve some local business students in working on aspects of the project beyond zoning. Also a workshop to work out a better name than the "Sydenham Station Creative Hub" (or just drop "Station"). The Council might also catalog the vocational training available in the area: brewers and other creative need training and certification.

ps:  John Whelan, of the Inner West Council Economic Development Unit proved that this local council can, literally, organize a drinking session in a brewery. ;-)
Posted by Tom Worthington at 10:31 AM No comments: 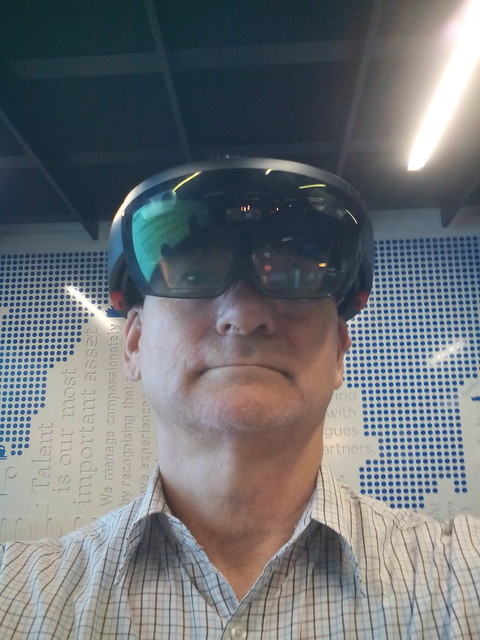 At the Instructional Design & eLearning Meetup last night at LinkedIn Sydney, I had the opportunity to briefly try Microsoft HoloLens. This was the most comfortable of the virtual reality headsets I have tried. The key feature is that the display is semi-transparent, superimposing images on what you can see around you. Also there is less of a catastrophic feeling. In addition the unit feels more balanced than other headsets which impose weight on the face. I was able with a little practice to use hand gestures to manipulate the image in front of me. But more significantly, I was still able to see and talk to people around me. The Microsoft HoloLens is still a large and cumbersome device to have on your head. We are a couple of equipment generations, and several years, from a unit which is suitable for everyday use. These will need to be reduced to the size of the MicroOptical_MyVu, from 2002, which clipped onto the side of a pair of spectacles (but lacked the sensors in the VR units). As it is you would need a good reason to use the Microsoft HoloLens, for gaming, education or work.

The case for gaming with VR is clear, however, applications in education and work are less clear. There are not many situations where the immersion augmented/VR experience counteracts the impediment of the equipment. There would be limited roles in education, where the student needs their hands free. In the workplace the roles would be even more limited. Such units have been proposed for those repairing complex equipment to provide detailed instructions. However, those repairing, for example jet engines, or heart valves, do not do so untrained: they already have to have a high level of skill and knowledge.

One obvious use is in defence and security applications. The technology in consumer VR headsets could make the units affordable for more than just fighter pilots (and the VR headsets for the F-35 are not working too well anyway).
Posted by Tom Worthington at 9:48 AM No comments:

My website has had some Google AdSense ads for years. These do not bring in much revenue. Google invited me to add AdSense "matched content units".It took some time to work out what these are. What Google does is select pages from your website and then feature photos from them, interspersed with advertisements, in a grid (see the bottom of my home page for example). The advertisements are marked as such, but because they are mixed in with page content, it is hard to tell which is which. The result looks good and it will be interesting to see if it increases revenue, or just annoys my readers.