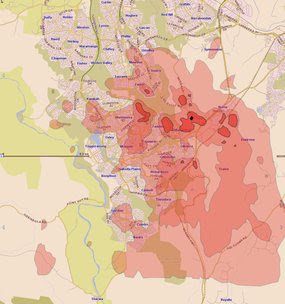 Efforts to build a data center with co-generation in Canberra have met with local opposition. The Garnaut Review interim report proposes a carbon trading scheme. The effect of this will be to increase the cost of electricity compared to that from gas (which is less polluting). But this is not as easy as it looks. As an example the proposal for a gas fired co-generation plant for the "Canberra Technolofy City" data center in Canberra is meeting community opposition. The plant will be much cleaner than a coal fired one, but the residents don't want it within a few tens of kilometers of them (the coal fired plants are hundred of kilometers away).

The opponents remapped the data provided by the plan's proposers to emphasize how far pollution would spread. This is a sensitive issue as Canberra is subject to an inversion layer in winter, trapping pollution. However, a new gas fired power station is going to produce very little pollution. Perhaps its output should measured in FWDE: "four wheel drive equivalents". ;-)

The proposers of the plant brought some of the problems on themselves by calling what they were building a "power station" and emphasized its capacity. If this was described as just a way to supplement the data center's power it is unlikely anyone would have noticed.

The community consultation documents show the data center "ground view-from Macarthur", of a starkly visible white building with four towers which look like smoke stacks, rising out of the countryside. If the building was painted grey-green and tan to blend into the landscape it would be far less objectionable. This would not increase the cost of the plant, the steel panels of the building could simply use the standard palate of Colorbond colours developed to developed to blend into the Australian landscape. For increased blending, the rectangular building panels could be of subtlety different colors, forming digital comflage and making the building difficult to see from more than a few hundred metres away.

If the stacks were in low visibility colors and below the ridge line of the surrounding hills, it would not look so much like a power station. Gas fired generators are very small units, and the one for the data center probably occupies about the space of a double garage. The buildings show in the plans will be the offices and the cooling plant for the data center, not the power station.
Posted by Tom Worthington at 10:21 AM