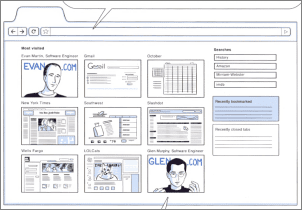 Google was planning to release its own web browser, called "Google Chrome". But the details went out a few days early. The main feature is that it will be more reliable for running web based applications, with multiple processes. What is as interesting as the web browser itself, is that it is detailed in a comic book, put on the web by Philipp Lenssen. The comic format is similar to the storyboards which can be produced by scriptwriting software such as Celtx and perhaps is the coming trend in documenting technical systems.

At Google, we have a saying: “launch early and iterate.” While this approach is usually limited to our engineers, it apparently applies to our mailroom as well! As you may have read in the blogosphere, we hit "send" a bit early on a comic book introducing our new open source browser, Google Chrome. We will be launching the beta version of Google Chrome tomorrow in more than 100 countries. ...

Posted by Tom Worthington at 8:09 AM