Measure of Man and Woman 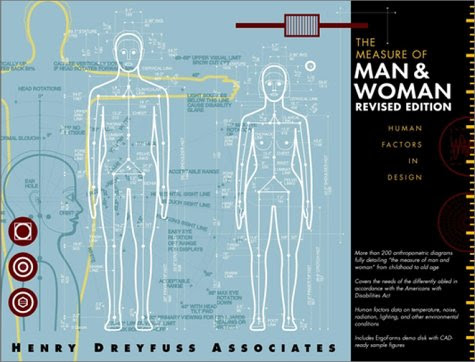 Wandering the shelves of the new University of Sydney SciTech Library, I cam across the 1960 edition of designer Henry Dreyfuss' "The Measure of Man". This is a set of charts showing measurements of men, women and children, with how far they can reach and see when standing and sitting. It also gives recommended sizes for desks, consoles and the like.

The updated, politically correct edition is called "The Measure of Man and Woman: Human Factors in Design" by Alvin R . Tilley of Henry Dreyfuss Associates (Wiley, 2001). The original work was developed from measurements taken of people in the US military and had separate sets of charts for men and women (from a time when men and women would be unlikely to be doing the same jobs). The new work combines men and women on the same charts. The full text and images are available via the Amazon online reader.

With the charts you can see what the recommended size for stand up and sit down computer consoles suitable for 99 percent of the male and female adult population, how high a console can be and still be able to see over it, what width to make the console. There are also measurements for children using equipment. This information is of increasing value for libraries, schools and offices as computer based working and learning become more common.

Some of the original information is a little esoteric for the average office, such as how the angle of vision narrows in low light conditions. This might be of value for designing a display used in low light conditions in a museum. The more general information is of value: for example will students be able to comfortably see the whiteboard at the front of the room while seated at a computer in the flexible learning center?

Some problems with the original measurements have been corrected: conversions to mm as well as inches are now provided. But the recommended sizes for desks have been rounded to a convenient number of inches and then just converted to mm. In practice the measures should be rounded for mm. As an example 15 inches is 381 mm, but it would be better rounded to 380 mm. Also the measurements of people used are mostly based on US military. They therefore will be less representative of the average person in the USA and even less typical of the rest of the world.

See also some books and DVDs on Industrial design:

Posted by Tom Worthington at 8:59 AM