The Fast Adaptable Next-Generation Ground Vehicle (FANG), is program from the Tactical Technology office of the US Defense Advanced Research Projects Agency, to design an amphibious infantry fighting vehicle in one year. This is to provide a replacement for the US Marines 40 year old Assault Amphibious Vehicle. This is an ambitious project as the Defence Department spent 40 years and $15.9B on the Advanced Amphibious Assault Vehicle (AAAV) before canceling that project.

However, such an "open source" approach faces numerous hurdles. Apart from opposition from a defense industry which has grown up on proprietary designs and large long term contracts, there is the issue of user requirements. The AAAV project failed, not due to poor engineering, but from unrealistic customer expectations. The AAAV was to carry 17 Marines, with their equipment, 120 km from ship to shore at 46 km/h. That requirement was feasible, with an aluminum hull, but when a requirement to protect against roadside bombs on land was added, the vehicle became too heavy.

Perhaps in parallel with their rapid engineering techniques, DARPA needs to investigate on-line decision making tools where the competing interests of the different customer stakeholders can be weighed up. It would be unfortunate if a vehicle can be rapidly engineered, but there is not an equally rapid process to decide what features such a vehicle should have and what trade-offs in capability are appropriate. 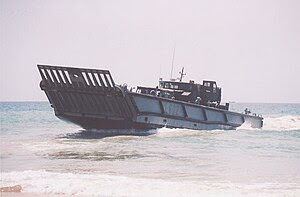 An example of an alternative approach to getting troops onto the beach is that adopted by Australia for its new two Canberra-class Landing Helicopter Dock Ships (LHD) currently under construction by Navantia in Spain. The Australian government has ordered 12 LCM-1E amphibious mechanized landing craft from Navantia. Four landing craft can be carried in each LHD, with each landing craft carrying two armored infantry vehicles over the horizon at 25 km/h. This approach simplifies the engineering, increases the flexibility and lowers the cost, with the landing craft just having to do one job well: travel at high speed on water and land vehicles on the beach. The vehicles can then be designed to protect troops on land, as exemplified by the Bushmaster Protected Mobility Vehicle. The Australian army's Australian Light Armoured Vehicle (ASLAV) has a limited amphibious capability.

Perhaps a Spanish/Australian consortium could put in a bid for the FANG project, with the combination of the LCM-1E and two Bushmasters, arguing this meets the requirements for a high speed, protected, amphibious "vehicle", which carries eighteen troops.

ps: Like the USA, China could not make a fast amphibious vehicle, so they strapped extra flotation and commercial outboard motors onto an old Soviet design. See:

Posted by Tom Worthington at 12:03 PM