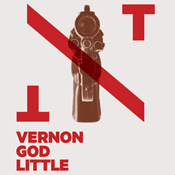 The play "Vernon God Little" at the New Theatre, Newtown Sydney, will appeal to fan of the TV Series Weeds. Vernon is a teenager in small town Texas caught up in the ambitions of the law, the media, family and friends, when his best friend massacres the high school class. This black comedy was adapted as a play by Tanya Ronder from the book Vernon God Little

Make sure you are ready for a marathon length performance. I found the first half a little disjointed with characters larger than life and the frequent lapses into country and western song. The theater warns of "simulated sex, drug use, strong language and adult themes ...", but most jarring were the very loud gunshots during the opening scene.

Tom Bannerman's set design is not as successful as other recent New Theatre productions, with the use of a perforated metal ramp causing problems for the actors. At times the large cast seem to be having more fun than the audience, but I found the pace improved after the interval (or it may just have been the effects of the champaign from the bar). The cast do their best with the material, but the play would improve if 30 minutes were cut from it, tightening up the pace, which at times seems to have a jumble of actors standing around just watching what a couple are doing.

This is not a play for those wanting quiet contemplation of the human condition, but would be good for a large party out for a riotous evening.

I attended as a guest of the Net Theater.
Posted by Tom Worthington at 9:11 AM