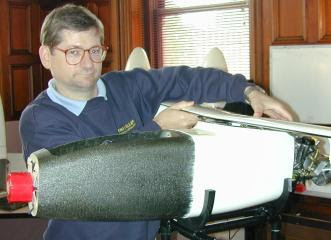 In 1999 I visited Aerosonde, in Victoria and looked at early models of the robotic aircraft under construction.

The Aerosonde was interesting in being small enough to be carried by one person, but having enough range to cross an ocean, and do so autonomously. This cuts across the usual division between small short range UAVs which are flown by an operator like a model airplane, and large long range UAVs which are semi-autonomous.

The Aerosonde would be a useful complement to the RAN's new amphibious warfare fleet, offering a low cost option to extend ship's sensors.

Posted by Tom Worthington at 11:36 AM