Phillip II of Macedonia Has Lessons for Greek Debt Crisis 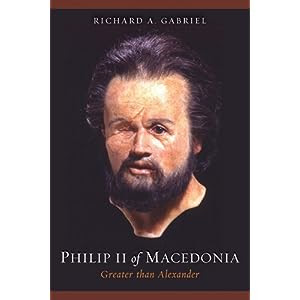 The book "Philip II of Macedonia: Greater than Alexander

" (Richard A. Gabriel, Potomac Books, 2010) is a surprisingly entertaining read, for a book about ancient history. It also has relevance today's power politics of the Eastern Mediterranean and the Green debt crisis.

Gabriel makes the case that Philip II of Macedon laid down the military, economic and political policies which were then followed by his far better known son Alexander the Great.

Having visited some of the places mentioned in the book, it was fascinating to hear about their role in Phillip's campaigns. Delphi retains much of the atmosphere of a sacred place, whereas Thebes does not appear to have recovered from the Macedonia attack on it. Thessaloniki has more in common with Istanbul than with Athens.

With the Greek financial crisis, it may be time to rethink what are suitable political units for the Eastern Mediterranean. It would not be politically acceptable to dismember Greece and transfer the northern region to an independent Macedonia and the eastern islands to Turkey, even if this makes economic and cultural sense. However, a looser Greek federation (like the former city states), within the European Union, might be acceptable. This would allow the different parts of the country to be decoupled economically from each other and integrated with the economies of neighboring countries.
Posted by Tom Worthington at 1:43 PM