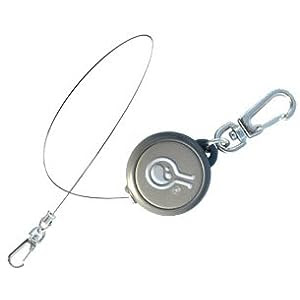 A USB flash drive with tens of thousands of prison and police records on it is missing in the UK. Perhaps Jacqui Smith, the government minister responsible, should have the contractor (PA Consulting) purchase some heavy duty retractable reel lanyards to secure the flash drives.

When a similar incident happened in Australia with a military officer leaving important data behind, I jokingly suggested that military personnel should be issued with a retractable cable clipped to their uniform. The officer could then clip the flash drive to the other end of the cable. If they forgot the flash drive, the cable would pull it out of the computer and retract when they got up.

Reels with nylon cable are commonly issued to staff with security swipe cards, but the clips and cables on most are flimsy. So I found on Amazon.com a stainless steel lanyard sold to sailors for attaching then penknives to. These are much stronger than the nylon cables and they have a secure steel clip on each end. While this started off as a joke, I found that people were ordering batches of these lanyards, presumably to hold flash drives. So I created an Amazon.com store for lanyards.

For those needing more security there are coiled plastic cable lanyards. Smaller ones of these are designed for divers and have a stainless steel clip on each end. Even stronger units are pistol lanyards. Some of these are actually a steel cable coated with plastic. One end of the cable has a wide nylon loop for attaching to a belt and the other a thin loop or a clip. They are designed for military and police handguns. One manufacturer claims that the cable is so strong it can help stop an attacker turning the gun on the owner. Because the lanyard is attached to the butt of the gun, the tension of the cable makes it naturally point away from the holder. As a result it is difficult for someone to point the gun at themselves or for anyone else to do that.

The military lanyards are more than would be needed for holding a flash drive, but then for security personnel, this sort of lanyard might fit better with their uniform than a shiny stainless steel reel. To complement this, there are also Waterproof USB Flash Drives.

Posted by Tom Worthington at 10:28 AM