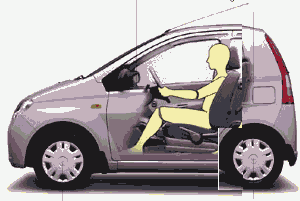 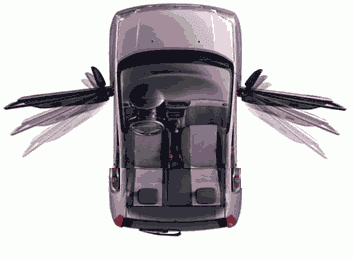 In 2005 I suggested Diahatsu cut the back seat out of a Cuore to make a two seater car about the same length as the Smart Car. Toyota, who own Diahatsu, went one better by making the Toyota iQ which still has a back seat.

At 2980 mm the iQ is it 845 mm shorter than a Toyota Yaris , 120 mm shorter than the Tata Nano and 290 mm longer than the Smart. The iQ has a conventional front mounted engine like the Yaris, unlike the Smart and Nano's rear mounted ones. The iQ is made shorter by making the engine, dashboard and seat backs thinner. It also compromises on rear legroom. 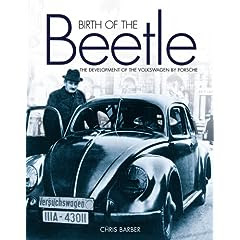 The car is described as seating thee adults and one child. When I first read this I thought of a small bucket seat sideways in the back, next to a full size one. In fact there is a conventional bench seat. It is just that there is not enough leg room behind the driver for an adult's legs. The rear adult passenger is accommodated by the front passenger pushing their seat forward.

The underside of the dashboard is higher on the passenger side to accommodate their legs, so they can sit further forward than the driver. This asymmetrical design is not a new idea: it was used on the second prototype (Type 62 "Der Stuka") of the VW Kübelwagen military adaptation of the Volkswagen Beetle in January 1938 (mentioned on page 222 of "Birth of the Beetle"). The extra room was to operate a machine gun.

Reducing rear leg room in a small car makes sense, as most of the time the rear seat is not used. It seems likely that if the iQ is popular, other makers will adopt similar techniques to give more interior room. Modifying the engine to make it slimmer would be difficult, but thinner the dashboards and seat backs could be retrofitted to existing car designs.

Posted by Tom Worthington at 8:47 AM