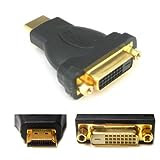 After being criticised for dismissing the importance of HDTV on the TiVo, it occurred to me I might be able to see the benefits of it, even without replacing my screen. My 24" Dell 2405FPW monitor has a DVI-D digital interface and came with a cable for it. But I never had anything to plug into the DVI-D socket, and used analogue composite video for the set top box and analogue VGA for the computer. The TiVo has a HDMI socket and there are low cost DVI-D to HDMI cables and adaptors available.

So I went back to where I bought the TiVo and asked for a DVI-D to HDMI cable or adaptor. I was offered a "monster cable" for more than $100, with the dubious claim this would give a high quality image. Instead I went around the corner to Jaycar Electronics and got a $15 adaptor (they also have a 3m cable for $38).

The image with HDMI was almost indistinguishable from the analogue composite cable at normal viewing distances. One change it did make was to correct the aspect ratio. Like most wide screen LCD computer screens, the Dell 2405FPW less wide than a wide screen TV. As a result when using analogue TV input everyone looks skinny. Using digital input corrects this, with a black band placed on the top and bottom of the image.

Given the flexibility of the TiVo, perhaps they could provide a stretch and zoom function to correct for the screen shape. Wide screen material is normally designed for cropping the edges on a narrow 3x4 screen, so it should be okay to zoom the image in a bit to fill up the monitor. This would get rid of the black bars at the top and bottom.

Looking at the image close up, it was possible to see individual raindrops falling past the camera to the ground in helicopter shots of the Beijing 2008 Olympics road cycle races (720p is better for fast moving images such as sport than 1080i). The resolution is almost too high, as I could also see the compression artefacts around the SBS logo and other graphics, which slightly spoilt the very crisp Olympics images (the logos on Channel Seven were much clearer).

In a way the high resolution screen can be distracting as it makes the quality of different material more noticeable. You start thinking "why is the picture blurry" rather than watching the show.

ps: DVI was one of those standards which tried to do everything: it had analogue and digital signals, with five variations of the plug. HDMI drops the analogue compatibility and so has a smaller plug with fewer wires (there are three types of plug, but only one in common use).
Posted by Tom Worthington at 9:22 PM