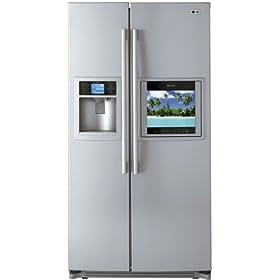 It appears that several makers have announced new Internet fridges, such as Whirlpool. These have a flat panel touch screen tablet computer in the fridge door. The same claims are made as for failed models five years ago: being able to check e-mail and surf the Internet in the kitchen and a fridge that will reorder what was needed online in the future. Unfortunately the idea of using a computer while standing up in the kitchen makes no more sense than it did last time. None of the fridges can actually automatically scan their contents.

A fridge door is not a good place to mount a computer screen. The fridge is in a high traffic area of the household and the user would be constantly having to get out of people's way as they went past, or wanted to get items out of the fridge. Operating a computer with a vertical touch panel is difficult and uncomfortable at the best of times. Different height people would have to bend over or stretch up to be able to operate the unit.

LG's Internet fridge was modified to be the LG Refrigerator TV: the LCD screen was retained but the controls were simplified and the computer replaced with a TV tuner. This has been more successful than their Internet fridge. There is less operator input needed for a TV and much of the time at breakfast, the TV is not being watched, just listened to. Electrolux have a similar "Screenfridge".

What I suggested last time, and some makers seem to have adopted, is to clip a wireless tablet computer to the door. Samsung attemtoped this with their RH269LBSH which had a 10.4 inch LCD touch pad computer on the front. This could be detached and operated using wireless networking. This makes a little more sense than a computer on a fridge, but not much. It would be much cheaper and more convenient to simply have a small computer, such as one of the new low cost sub-notebooks, on the bench-top, or even attached to the wall, elsewhere in the kitchen.

You could make your own Internet fridge by covering the back of a PDA, or an iPhone with magnetic plastic. This turns the device into a fridge magnet. You can operate it attached to the door, or pull it off and use it. Alternatively a charging cradle for an iPhone, could be attached to the fridge door. This could be similar to units for car dashboards. But keep in mind that an electronic device attached to a fridge door may be easily damaged.

Another problem with the Internet fridge is their high energy consumption. Makers only provide the Internet function on their largest, top of the range two door models. I spoofed this by proposing an Internet Bar Fridge.
Posted by Tom Worthington at 8:39 AM

>You could make your own Internet fridge by covering the back of a PDA, or an iPhone with magnetic plastic. This turns the device into a fridge magnet.

iPhone + magnet = possibly not such a great idea?