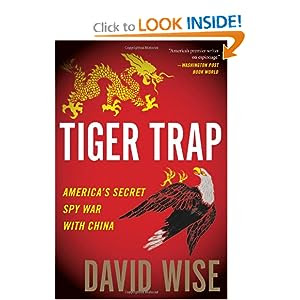 " by David Wise (Houghton Mifflin Harcourt, 2011) describes some cases of technology espionage in the USA. The author's thesis is that since the end of the cold war, a new type of spying by China against the USA has emerged. This uses very large numbers of Chiniese nationals and those from the Chinese dispora to each collect small amojnts of information, much of which on its own is not classified. It also involves befriending US citizens and have them inadvertently provide sensitive information.

But none of the techniques discussed in the book are new, nor are they exclusive to China. All governments, since the beginning of nation states, have made use of these techniques. Any person with access to sensitive information in a government agency or company should be routinely warned about saying to much at home, or abroad, to anyone. Singling out one country as a threat does not enhance national security.
Posted by Tom Worthington at 1:54 PM