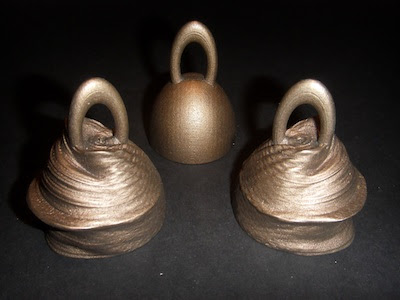 Greetings from the Research School of Computer Science at the Australian National Unviersity in Canberra, where Stephen Barrass from University of Canberra is talking about "Physical Sonification Dataforms". He converted data about the hearing characteristics of ears and rather produce the usual graphs, converted into a 3D printed metal object. He started by producing a medallion and then bells. He found that it was possible to hear the differences in the data in the ring of the bells. The bells can be ordered from Shapeways 3D printing service. It occurred to me that such objects might be of use for people who can't see graphs.

ps: One comment Stephen Barrass made was that the 3D printed metal was extremely hard, as it has been laser sintered.
Posted by Tom Worthington at 4:32 PM