Jaycar Electronics sell a Sensor LED Light Strip Kit. This consists of a 300 mm flexible self adhesive strip with 12 LEDs in it, a PIR detector the strip plugs into and a 240 to 12 volt power supply.

The LEDs are rated at 130 lumen and are 2 Watt per strip. With the light spread out over the length of the strip they are more useful than one bright LED.

The PIR detector is much smaller than those used for 240 lights, being about half the size of a matchbox.

I installed the strip under a shelf in my pantry. About the only problem is that the plug for the power supply is a little loose.

The lights are quite bright and so make the area above the shelf where they are installed seem dim. I might move them to the top shelf and install a second strip (extra strips can be purchased separately). The strips have a socket on one end and a plug on the other and up to six can be daisy chained together and run from one power supply. 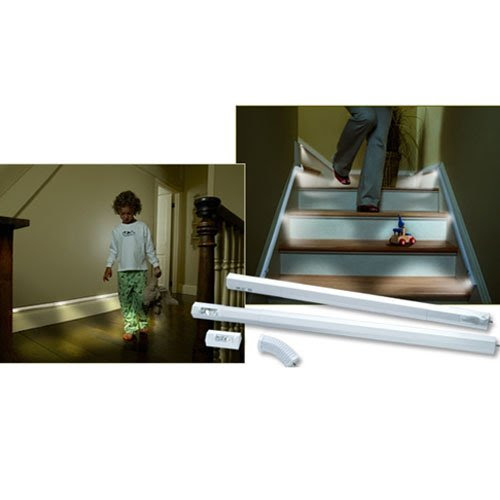 provides similar features. But it has the LEDs in a rigid bar.
Posted by Tom Worthington at 4:40 PM