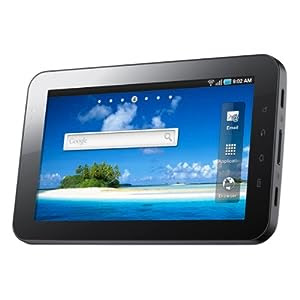 Tesltra shops have the Samsung Galaxy Tab alongside the T-Touch Tab (a Tesltra branded Huawei Ideos Tablet S7). As befitting its much higher price than the Huawei, the Galaxy Tab feels much better made and is much faster in operation than the T-Touch. Its only fault is that it is a little heavy to hold in one hand and could benefit from a rubber case to make it easier to grip.

Using the tablet to look at my blog entry on pictograms for a fish and chip shop, I noticed that the icons were the right size for using as touch screen buttons. Using CSS I had made these 4 em square. The images were as high as four lines of text, making them about the same size as a 12.5mm standard finger.

Using CSS buttons which automatically resize for web pages in proportion with the text size would seem to be a way to get around different smartphone and tablet screen sizes and resolutions. Someone who has poorer eyesight and so uses a larger text is likely to also appreciate having larger buttons to press.

Posted by Tom Worthington at 11:25 AM