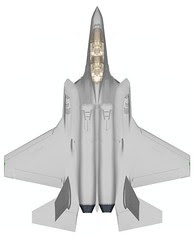 The Australian Government selected the Lockheed Martin F-35 Lightning II single-seat, single-engine stealth multirole fighter to replace the F-111C and F/A-18 Hornet. While a capable aircraft, the F-35 does not have the range of the F-111C. This will be made up for, to some extent, by the use of in flight refuelling, but a larger aircraft would be desirable. It would be feasible to produce a twin-seat, twin-engine, long range derivative of the F-35.

The F-35 "Joint Strike Fighter" was planned in three variants: F-35A conventional takeoff and landing (CTOL), F-35B short takeoff and vertical landing (STOVL) and F-35C carrier aircraft. A fourth variant was added in 2010, the F-35I for Israel, derived from the F-35A.

It would be feasible to add a fifth variant, the F-35D, derived from the F-35C, which has larger wings and tail control surfaces than the F-35A and B. The proposed F-35D Long Range Variant would differ from the F-35C by having a larger fuselage and wings, twin engines and a crew of two. The range of the F-35D would be three times that of the F-35C with the same weapons payload.

The F-35D development would be relatively rapid, low cost and low risk, compared to a completely new design. The F-35D would follow the approach taken with the successful development of the F/A-18E/F Super Hornet from the F/A-18C/D Hornet. More commonality with the existing aircraft would be possible than was the case in development of the F/A-18E. The sensors, computers and other electronic components of the F-35 could be used unchanged. Some components of the F-35 would be duplicated for the F-35D, such as the engines and cockpit instruments. Other components would be scaled up, such as the landing gear and the fuselage.

The Australian air-force requires only 24 long range aircraft to replace the F-111C and development of the F-35D could not be justified for this small production run. However, the US Air Force is investigating options for a Next-Generation Bomber. The F-35D would meet the requirements for such a medium bomber. It would have advantages in commonality of training and maintenance with the F-35.

In 2006 the Australian Department of Defence invited participation by Australian researchers in the F-35 project. One area for research could be for the Australian government to fund a small study into the feasibility of the F-35D and see if this sparked interest by the US Government.
Posted by Tom Worthington at 10:21 AM

I seem to remember people asking at the time of the Super Hornet purchase why we didn't go for the F-15E, which is a twin seat, twin engine, long range strike aircraft that replaced the F-111 in the USAF. Ah well.

Not sure about the twin engine. A second seat, stretched fuselage, and extra fuel tanks were all added to the single-engine F-16 fairly easily, but a second engine is a major redesign.

Media reports indicate that Lockheed is considering adding computers and other electronics from the F-35 to the F-22 Raptor fighter, to keep it up to date.

But installing electronics in an aircraft can be difficult and expensive. It might be quicker, simpler and cheaper to build a twin engine version of the F-35 to replace the F-22.

Many defence projects have failed due to the complexity of software. In contrast building a larger airframe is relatively simple engineering.