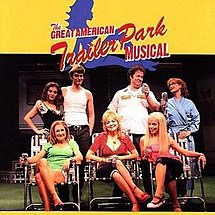 The Great American Trailer Park Musical had its Australian premier at the New Theatre in Sydney last night. This was the first musical I have been to which managed to work "Doppler radar" into the lyrics. What the cast lacked in singing ability they made up for in exuberance. The Great American Trailer Park Musical (by David Nehls and Betsy Kelso) is at the New Theatre, Newtown, until 18th of December 2010.

ps: The US Original cast recording and Music and Lyrics are also available.
Posted by Tom Worthington at 5:09 PM