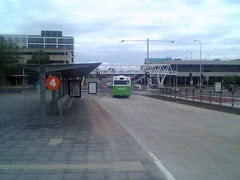 The Westfield Bus Station is built on the western side of the newly expanded Westfield Belconnen building (aka "Belconnen Mall"), with a convenient door to the shops. The station will have an ACTION information office and cafe (both yet to be fitted out). The bus stops appear to be at ground level, but are built up over what was previously a cutting (presumably there are shops and/or car parking beneath). The shops in the new section of the mall have not yet opened, with access provided to the old section. Even so this should be a convenient way to access the western end of the mall.

The Belconnen Community Bus Station is built on the site of the demolished (and not missed) Belconnen Bus Interchange. The previous interchange was built like a railway station, with one long island platform down the middle and bus bays on either side. There were pedestrian bridges for access from either end. While in theory this made the interchange safe and convenient for passengers, it meant a long walk if you wanted to get to the community centre right next to the interchange (you had to walk to the end of the platform, over the bridge and then back up the hill). The new interchange has the buses in the middle and platforms on either side. This requires some passengers to cross the road (traffic lights are provided) but the platforms are at ground level and accessible from several points on either side. One issue will be that with many buses using the station, it may be inconvenient for pedestrians to cross the road. A fence has been built to discourage those wishing to cross at other then at the lights, but the fence would not appear to meet pool fence standard AS1926.1 2007 and the average teenager is likely to be able to vault over it. 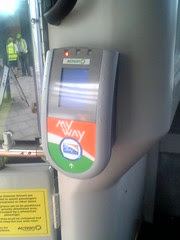 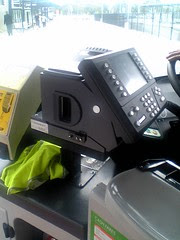 The MyWay contact-less smart card ticketing system was installed on the bus used for the tour ( but the tour was free). The new ticket system is being fitted to all busses, with the old magnetic stripe reader ticket machines relocated to make room (the old units look a little battered compared to the new equipment).

When the new MyWay system will be in use is unclear. In July the ACT Chief Minister, Jon Stanhope, announced this was due to commence in the second half of 2010, but ACTION are now advising "early 2011". Such smart card systems have had problems in Melbourne, Sydney and Brisbane. But Canberra is using the more successful system used in Perth ("SmartRider"). The hardware used appears to be the Parkeon Wayfarer 200 Electronic Ticket Machine and Parkeon Astreo Contactless Smart Card Validator. The Canberra system should be easier to implement, as there are no trams, ferries or trains to use the system, just buses.
Posted by Tom Worthington at 1:42 PM