The 2010 Walter Burley Griffin Memorial Lecture was presented this evening by Professor Brenda Vale and Doctor Robert Vale, Victoria University New Zealand, at the the newly expanded National Gallery of Australia, in Canberra. This was sponsored by the Australian Institute of Architects ACT Chapter, and University of Canberra. Professor Roger Fay (University of Tasmania) was the “respondent”. 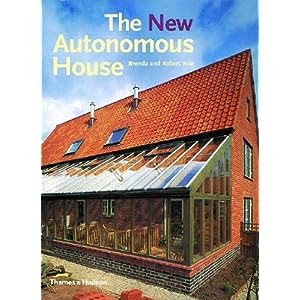 The Vales are sustainable housing pioneers, with their 1975 book "The Autonomous House" (new edition in 2002: "The New Autonomous House: Design and Planning for Sustainability"). They developed the NABERS building rating system for the Australian Government.

In their talk the Vales looked at how Canberra would be if its citizens were to adopt a sustainable ecological footprint. This is topical as the ACT Government is holding Canberra 2030 Planning Workshops. 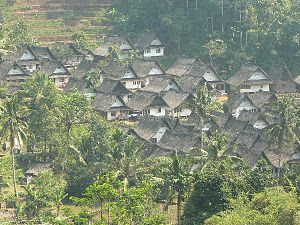 After a humorous comparison of Australia and New Zealand, the point was made that both countries are large enough to support their populations in a sustainable way, with a small enough “footprint”. The fair share footprint for the world is 1/9 gha/person. Kampung Naga Indonesia was shown as an example of a stable population village.

The Vales suggested thinking of the ecological footprint as a ration book. Canberra would require a 75% reduction in resource use to meet the global ration. A 1998 study reported “Canberra's Ecological Footprint” (by: Anne Close, Barney Foran, CSIRO, 1998) . But the footprint needs crop, forest and land for energy production.

The footprint could be reduced by 50% by eating vegetarian (or less by eating Kangaroos) and 25% by eliminating proceed food. This would also make the population healthier, reducing health cost. 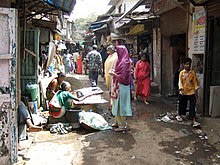 The Vales pointed out that smaller houses have a smaller footprint, regardless of the materials used. Also energy saving from operating the houses has less effect. They pointed out that 1940s houses were 90m2 and are now about 200m2, with fewer occupants. They showed a photo of a four generation Vietnamese family with a bicycles and small, but happy house (reminded me of Kevin McCloud's documentary "Slumming It" about Dharavi in India). At the Canberra 2030 Planning Workshop, I suggested Canberra could triple its density with smaller homes.

The Vales pointed out that the ACTION bus web site gives detailed instructions on how to catch a bus. Despite this most Canberra transport energy use is from cars. Also the low cost of air travel results in high levels of energy use. hey pointed out that Canberra was designed for trams, but they were never implemented.

Of interest was the disproportionate footprint of alcohol and tobacco. This is a current issue, which reminded me of the discussion of water use in the Murray-Darling Basin. There have been objections to using the water for environmental flow, as this would decrease food production. But much of the irrigation water is used for growing grapes for wine. There is now a wine glut with falling prices (as documented in "Structural adjustment pressures in the irrigated agriculture sector in the Murray–Darling Basin", Frontier Economics, March 2010). It seems odd to have a government policy which causes environmental damage, depresses the agricultural sector and promotes alcoholism.

Some amusement as caused by the Vale's comparison of the environmental cost of pets, with a cat equating to a Smart car and a large dog to a family size car. More seriously they suggested a city in 2050 with pedestrians and cycling, vegans, walking to work.

The Vales pointed out that “The Limits to Growth” predicted global collapse by 2050 and recent CSIRO research in "A Comparison of the Limits to Growth with Thirty Years of Reality" (Graham Turner, 2008) showed the predictions so far were accurate.

What the Vale's analysis did not take into account is different levels of wealth. It seems impractical to expect rich Australians to change their lifestyle to match that of an Indonesian villager. It would seem more feasible to adjust the footprint relative to wealth. It would be more palatable to compare an Australian to a European, or North American.

For more than 30 years the Vales have been proposing solutions based on reason. However, most of the population have not acted on it. It would seem an impossible task to convince wealthy people to give up their wealth. Rather than appealing to reason, I suggest we need to appeal to stronger motivations of fear, greed, vanity and envy. These are the motivators used for convincing people to consume more and could be used to induce them to consume differently. Wealth can be redefined in a more ecologically sustainable way and "de-materialised". 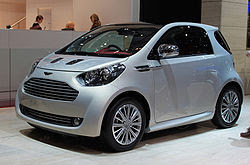 Car makers are under pressure to increase the fuel efficiency of their fleet for the US Corporate Average Fuel Economy and European CO2 emissions from light-duty vehicles legislation. Luxury car makers, including Audi and Aston Martin, have responded with compact luxury models. These are small cheap cars (Audi A1 based on the VW Polo and Cygnet based on the Toyota IQ) with cosmetic changes and accessories, to justify a higher price. These small cars are profitable for the car makers and it is better for the environment if wealthy people drive small expensive cars rather than large expensive ones.

Posted by Tom Worthington at 8:01 PM