Dr Raymond Choo: Pearcey Award for Young Achievers in IT.

Dr Choo is one of the leading thinkers in the burgeoning area of cyber security. He has developed a significant and substantial profile in both the academic community and in the ICT industry with his thinking on cryptographic key management protocols and more recently in Cyber-crime and money laundering.

Joel has already established himself in the ICT industry as one of the bright young ICT stars. Joel’s energy, drive, and leadership have had substantial effect in his professional role and in his voluntary roles in the profession and the community more broadly. His tireless efforts to perfect work products for the benefit of the client and his employer are matched by his unfailing contributions to promote ICT as a career to young people and to support those less-fortunate than himself through charitable works. Joel is a perfect role model for young people in any industry and in ICT in particular.

Lisa supported the profile and involvement of women in the ICT sector in her capacity as President of the organisation Women in Information and Communication (WIC) from June 2007 — June 2010 and helped establish WIC as the premier networking organisation for women in ICT working in Canberra. WIC is a Canberra based non-profit organisation and was launched by the then Chief Minister of the ACT, Kate Carnell, on 17 May 2000.

The Leonie Warne Medal recognizes the outstanding contribution of an individual to the promotion of women in the ICT industry in Canberra.

The medal is given in honour of the late Dr Leonie Warne who passed away on the 14 June 2010. A founding member of the ACS (Australian Computer Society) Canberra Board, Dr Warne was highly committed to promoting the role of women in IT.

The Engine and Titan Framework, developed by PSARN International, is a leading-edge toolset for accessing and revitalising legacy database-backed applications. The Titan Framework was highly-commended last year and with the addition of the newly developed Engine database wrapper, the whole package offers a flexible, resilient and efficient means of developing new applications based on legacy data trapped within out-dated systems. The powerful flexibility of the Engine particularly impressed the judges. 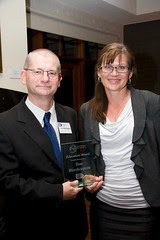 The Green IT Strategies course is the world’s first globally-certified green ICT course. The course was developed and is delivered by Tom Worthington, a long-standing and distinguished ACS member. Not only does the course introduce green ICT concepts and strategies to the students, it requires them to develop those strategies for their own workplace and many have gone on to implement them. The course is offered in Australia, Canada and shortly in Africa and South East Asia.

The team demonstrated how a highly-effective team can produce outstanding results in a very short time-frame. The team introduced some innovative techniques for creating avatars for the game they developed and produced an extremely high-quality result in a very short time. The team also shared their techniques and enthusiasm with their peers, reflecting the kind of professionalism that the ACS would wish of all high-performing teams

The Admin Bandit website offers a simple, easy-to-use but robust and specifically-tailored application for managing the finances of a not-for-profit organisation. This website simplifies and standardises the work involved for volunteer treasurers to ensure that the not-for-profit organisation they are overseeing manages its finances properly and complies with relevant laws and regulation. The site supports proper governance in an environment where expertise is not always available for organisations that need the help most.

Posted by Tom Worthington at 12:40 PM