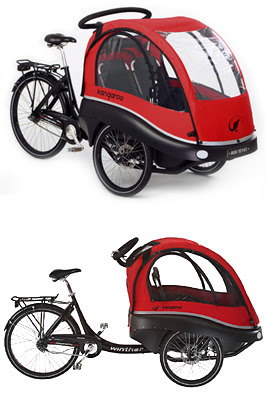 In Canberra until 1 June 2008 there is a display of Danish designed bicycles and sustainable technology: "Dreams on Wheels: Danish Cycling Culture for Urban Sustainability".

The Copenhagen Citybike "rent-a-bike" system is on display, with bikes parked outside which visitors can take for a spin. These bikes have a map of Copenhagen fixed to the handlebars and prominent white solid wheels, making them look like something from a circus. They have a very solid (and heavy) steel frame and no gears, which must help them survive hard wear in rental use, but hard to ride. Perhaps the bikes are made to be not that nice to ride to discourage theft. The Copenhagen bikes are a lot lower tech looking than DB (German Railways) "Call a Bike" rental bicycles.

Apart from the rental bicycles, most striking were the three wheel bicycles on display for the transport of children. These were by Christina bikes, who even have a model to carry a wheelchair. What stuck me was that apart from the two wheels, the bicycles were very conventional, with the usual upright riding position. A recruitment tricycle would seem the ideal starting point for carrying a load, rather than a bicycle.

The Kangaroobike is another three wheel design for carrying children. This has two small wheels under the load at the front and a conventional large wheel at the back. This allows the cabin to be wider, as it is over, rather than between the wheels. There is a lightweight cloth covered frame to form a roof. This model seemed to use more hi-tech than the Christina, and on the way to a recumbent, but might not be as robust. The Christina bikes are sold in Australia by psbikes.

Biomega, had bicycles which looked interesting, rather than ridable. They use a drive shaft, in place of the usual chain drive. This is claimed to be more efficient, but a bicycle chain is already one of the most efficient power coupling systems invented. Another of their designs features a full size folding bicycle, where the security cable is incorporated in the frame. The idea is after unlocking the bicycle you loop the security cable around a hook near the bottom of the frame. The cable is stretched tight to a point under the handlebars, bracing the frame. This makes sens as folding bicycles have problems with strength (mine broke in half while I was riding it). But using a component of the frame for this dual use is not a good idea. Unfortunately I couldn't find this bicycle on Biomega's stylish, but difficult to use web site (like their bicycles, the web site seems to be designed for creating an impression, not real use).

Apart from bicycles, there were some fact sheets from the Danish embassy on sustainability topics of environment, energy and climate. The one on "What makes technology eco-efficient?", caught my attention. Also there was a fact sheet on the history of Danish Architecture.

As well as the display of bicycles (open Tuesday-Sunday from 10 am - 4 pm from 3 May until 1 June), there are a series of talks, at the same venue. The film "Cities for People" was quirky entertainment as well as informative:
Also provided at the event was a media release claiming Copenhagen as the world's best bicycle city, given that my folding bicycle has been banned from Canberra buses, I can't argue:

Bright-eyed Copenhageners on the bicycle lane in the morning have long been a part of the city's scenery and the bicycle's popularity benefits both the environment and the residents' well being. The city's visitors have ample opportunity to hop on the saddle and experience Copenhagen on two wheels. But the city of Copenhagen wants to do even more to advance the bicycle culture. By 2015, the world's best biking city will be named Copenhagen.

These numbers come from the City of Copenhagen's environmental plan, ECO-METROPOLE OUR VISION 2015, which together with other green initiatives, works towards making Copenhagen the world's best biking city by 2015. The project also ranks high on funding. 150 million DKK have been allocated from 2007-2009 for bicycle parking, green biking routes, more bike lanes and increased safety.

Bike City Copenhagen
In May 2007, Copenhagen was the first city in the world to be named Bike City - a distinction that strengthens the ambition to become the world's best biking city. It was the international cycling union, UCI, which appointed Copenhagen to Bike City. That means a number of international cycling events will take place in and around the city in 2008-2011. The 2011 world championship in road cycling will be the showcase event. But other sporting events like the world championship in track cycling, BMX World Cup and Track World Cup in Ballerup Super Arena will fill the city with cycle enthusiasts from the whole world. During this time, there will also be a variety of public cycling activities that will focus on Copenhagen as Bike City and strengthen a healthy urban environment.

Bike lanes & green routes
There already exists many ways to safely get around Copenhagen on two wheels. In the last 100 years, 300 kilometres of bike lanes have been built in the City of Copenhagen - and an additional 50 kilometres are on the way. Currently, the city is building green routes through the city to ensure a safe and green transport route for cyclists while creating green spots in the city's landscape. Out of the 100 kilometres of green routes planned throughout the city, 37 kilometres are completed and a good part of the route through the district of Nørrebro has already been established. When that is finished, there will be green bicycling connections through several areas of Copenhagen, namely from Emdrup in the north across Frederiksberg to Valby in the south. A bike and pedestrian bridge over Aagade is part of the project to create safe cycling connections between the City of Frederiksberg and the City of Copenhagen.

Green wave for the cyclists
There are only a few places in the world, where you will find traffic lights specifically for cyclists. But in Copenhagen, you'll see the miniature traffic lights many places, especially at heavily trafficked crossroads. The clearly marked blue bike lanes also increase traffic safety for the vulnerable cyclist. On Nørrebrogade, green waves have been set during the morning and evening "rush-hours" so the approximately 30,000 bicyclists that ride this stretch daily get a quicker and safer bike lane. The traffic lights are set so that the 2.5 kilometre stretch between outer Nørrebro to The Lakes can be covered in only seven and a half minutes at 20 kilometres an hour. The speed is brisk but kids can also keep pace. Soon, cyclists in other areas of the city will enjoy the green waves because more are on the way.

On bike in North Zealand
North Zealand offers a wealth of scenic routes that can be covered on bicycle. One of these routes is Strandvejen, the costal road between Copenhagen and Helsingør, which is also a Marguerite route - an especially beautiful route through the landscape. Enjoy views of Øresund and the large coastal houses, Bellevue Beach, Dyrehaven (The Deer Garden) and Eremitage Castle. At the same time, sights and attractions pop up along the way -- Denmark's Aquarium in Charlottenlund, Karen Blixen Museum in Rungsted, Louisiana in Humlebæk and Hamlet's Kronborg Castle in Helsingør. In addition you'll find more than 3,000 kilometres of national bicycle routes that wind their way through the beautiful Danish countryside.

Take your bike on public transportation
Over time, public transportation in and out of Copenhagen has conformed to the bike culture and it is possible to take your bicycle with you on the S-trains, Metro, local and regional trains as well as InterCity and InterCitylyn trains. Most S-trains have a special area or flex-room for bikes. All trains require a special bike ticket, which can be purchased at the station. Do remember to reserve a spot for your two wheels on InterCity and InterCitylyn trains.

Experience Copenhagen on two wheels
The colourful city bikes make it possible for the city's visitors to discover Copenhagen on two wheels. And, they are free to use with a deposit of DKK 20. 2007 marks the 12th season that the 2,000 city bikes have dotted the city landscape from April to November. With 110 city bike stations in the inner city, there is always a bike nearby and the four rolling workshops make sure the bikes are in top working condition every day.

Guest of many of the city's hotels can also rent a bike directly from the hotel reception for approximately DKK 100 per day. For example, the hotel chain Arp-Hansen Group offer bicycle rentals from its nine hotels in the centre of Copenhagen.

A good alternative to finding your way around the big city jungle on your own is a guided bike safari with a personal guide. It is a different and more active way to experience the city's life and architecture. Both Copenhagen Tours and City Safari arrange guided tours for one person or groups. The tours' themes range from Historical Copenhagen, In H.C. Andersen's Footsteps or Danish Design Safari as well as themed tours such as Photo and Quiz Safari, Big City Organics and a guided tour through the city's nightlife can be arranged. Tours are two and a half - four and a half hours long and it is possible to supplement your experience with lunch in the green areas along the way.

The Asian inspired rickshaws or bicycle taxis make it possible to experience Copenhagen by bike without having to step on the pedals. The two largest operators are Copenhagen Rickshaw and Flying Tigers Rickshaw. They both primarily serve the inner city but you can also hire them for longer trips. Call and reserve a trip or hail one of the colourful bicycles on the street. Most drivers speak many languages, know the city like the back of their hand and can recommend sights, attractions and events.

Posted by Tom Worthington at 10:30 AM