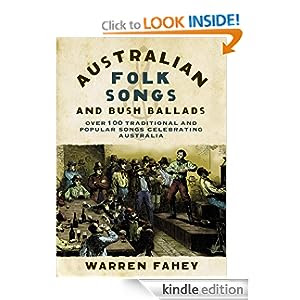 Greetings from the National Library of Australia in Canberra, where cultural historian and folklorist Warren Fahey is talking about his book "Australian Folk Songs and Bush Ballads

". This is claimed to be Australia's first "enhanced" eBook.

A representative of the NLA did a gushing introduction about ebooks. Warren provided an entertaining history of his involvement with technology, starting with the crystal wireless and tin cans and string telephone. He then talked about his involvement with bush music and the ABC. But so far no explanation as to what an "enhanced eBook" is. I assumed it had digital audio files, along with images and text.

Warren went on to explain how he obtained a copy of his own field folk song recordings from the NLA and converted them to a suitable format for the eBook.

Warren used what appeared to be an Apple iPad for a demonstration of the eBook. He showed what looked like a traditional book format, with video displayed like a still image (click on the image to play the video) and audio controls (click the play button). The audio used seemed to be short excerpts, with links to on-line stores to purchase the full recording.

Warren said that volume was 600 Mbytes, due to the sound files. The publisher is splitting the book into volumes.

What was a little confusing was that I could only find an Amazon Kindle eBook edition of the book on-line. Warrne explained that Amazon refused to carry a Kindle eBook with links to Apple iTunes (for the audio). So a different edition had to be produced with different links in it.

This is a brave attempt at an "enhanced" eBook. But I am not sure that including the audio files in the eBook file is worth the effort. Instead the files could be downloaded from the web as required.

Warren ended by discussing what effect eBooks will have on book publishing and distribution. This provides a world market for the author, but cheaters challenges for the local bookstore and library.

At question time I asked what Warren's next ebook would be like. He said he wanted to do a book for children, being the 21st century of the Coles funny picture book for kids.

Someone asked how the cost of producing an enhanced ebook compared to a PDF ebook. Warren replied it was must more expensive by PDF ebooks were so static and dull.

This appears on topic for Senator Kate Lundy's Digital Culture Public Sphere on-line and in Sydney, 6 October 2011.
Posted by Tom Worthington at 12:35 PM

Very Interested in the possibilities. ( I am an artist, my wife is an Author/historian and have friends that design art books)
As I expect you know, trying to convert normal existing publishing formats such as PDFs into the digital e.pub format is a nightmare . So I thought it would be better to do the whole design from scratch in the ebook format.

However there does not seem to be any really WYSYWG design/layout programs explicitly aimed at E.pub - the best I have seen remind me of web authoring 'tools' back in 1996 and
We are not up to 'hand' coding.

Do you know of any rough equivalents to 'Quark' or dream weaver ?

Tom another Question- Have read that there are real US tax problems for non US citizens publishing on amazon/ibooks. Is it possible to do it on an Australian e-store?

Another Question Publishing on a US site raises probs with US withholding tax - can we publish on an Australian 'ibook' store yet?