Android Smart Phones for Military Use 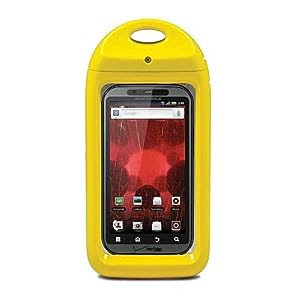 The article "Infantry Innovation" Daniel Wasserbly, Janes Defence Weekly, 24 August 2011), discusses how the military can use smart phones on the battlefield. Mobile phones have been heavily used in support. Where there is no cell coverage available, mobile cell towers with satellite links can be used. Now consideration is being given to using the phones on the battlefield.

One option is to have a low power device to relay the mobile phone signals into the military radio network (much like the pico-cells now available for householders to boost mobile coverage). But this creates considerable security and support issues.

A simpler option is to use the smart phone as a terminal to the existing military radio. In this case the operator slips their civilian into a cradle with a cable plugged into a military radio. As well as providing power and data interface, the cradle protects the phone from damage. This approach should work well with the current crop of smart phones.

Smart phones (apart from the Apple iPhone) now mostly use the same standard micro-USB connector, for both charging and data. The connector is generally at the bottom centre of the phone, but some have it on the side, so a plug on a cable would be needed. It should therefore be possible to make a one-size-fits-all cradle to fit smart phones. This cradle would have an oversize case with a flexible transparent window on the front, like the Aqua Box Waterproof Smartphone Cases

, so the touch screen can be used. Such a unit would be much larger than the custom cases for phones but still much more compact than the typical purpose built military terminal. The case would also be very cheap, being able to be mass produced, and sold for less than $100 retail. A similar, but larger case could be made for tablet computers.

There is much discussion in military circles of software development kits for running military applications, such as the US Amry Mobile/Handheld Computing Environment (M/HH CE). But the basic use for the smart phone will be to act as a web browser to remote applications. This requires no additional software and the same applications can be sued on tablet computers, smart phones, laptops and desktop computers.
Posted by Tom Worthington at 3:39 PM