Convert Apple iPhone into a Flip Phone with 3D Printing 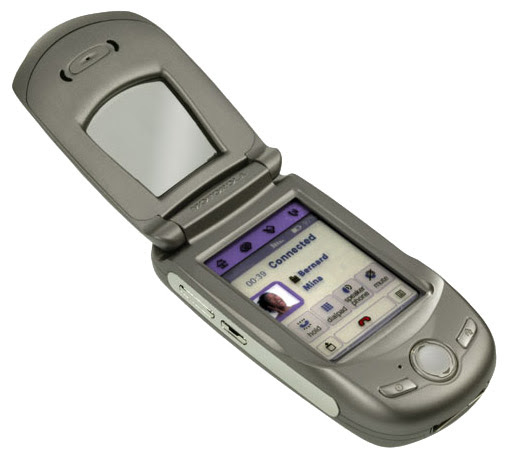 Recently I purchased a Huawei "Deuce" U8520-1 smart phone. This has the same slate phone style of case as the Apple iPhone and many other other smart phones. A custom cover to turn them into flip phones, much like the Motorola A760, would make them much easier to use.

Most of the front surface of a slate phone is taken up with a touch screen. This optimizes the screen size, but creates problems. The Motorola A760 had a cover over its touch screen which hinged up to provide the ear-piece. The cover has a transparent window.

The major problem I have noticed with slate phones is poor sound quality for phone calls. The speaker and microphone are located at the top and bottom of the screen of the slab phone. The flat glass surface of the phone is not shaped to make good contact with the ear and so does not block external noise. The slate phone is not tall enough to reach the user's mouth, resulting in external noise being picked up by the microphone.

Other Problems with Slate Phones

The slate phone has a large unprotected glass screen surface, making it vulnerable to dirt and breakage. The antenna for the phone is located at the top, near the ear-piece, blocking the radio signal and also exposing the user to possible radiation.

The antenna can be placed near the hinge of the phone, at the point furtherest from the user, improving signal strength and reducing radiation hazard.

When closed the flip phone screen is covered and so protected from dirt and damage. The touchscreen is covered and so protected from inadvertent button presses, removing the need for a keyboard lock. Some flips are "active" so that closing the phone automatically ends a call, with no button presses needed. Opening the phone can also be set to answer a call.

Flip Cases With No Electronics Needed

Most flip phones have electronics in both halves of the phone with wires connecting the two parts at the hinge. Usually the screen is in upper part of the phone and keyboard in the lower half. This allows more space for controls, but at the cost of increased manufacturing complexity.

Some flip phones have all the electronics in one half, with the flip cover being just a piece of plastic with channels molded into it to carry sound. The microphone and speaker are located in the body of the phone as they are in the slab phone. But a channel in the flip carries the sound down to the speaker's mouth, or up to their ear.

It should be feasible to add a flip cover to a slab smart phone with minimal redesign. A hinge needs to be added to the case of the phone, with a hollow channel in it to carry sound. A transparent window on the flip (as in the Motorola A760), would allow the user to see who was calling, without opening the cover.

Some phones are designed to have user installable interchangeable covers. A flip cover could be designed as a replacement for such phones.

There are also more bulky cases designed to provide additional protection for phones. This more bulky design would provide sufficient room for the flip mechanism to channel sound from the phone's speaker or microphone.

A flip cover would be an interesting use for 3D printers. Cases are normally mass produced using plastic injection molding. This requires an expensive metal mold to me made for each model of phone. Instead the digital design of each case can be stored and when a case is ordered, just one produced by the 3D printer. There are already some 3D printing services offering phone cases, such as Shapeways and Freedom of Creation . But they do not appear to have any flip designs at present.
Posted by Tom Worthington at 5:07 PM