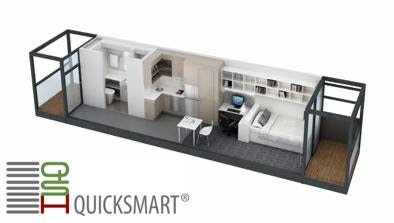 The Australian National University has announced it will build 1023 new units for students over the next two years, with funding from the National Rental Affordability Scheme (NRAS). What the announcement did not mention was that these will be digitally equipped smart apartments and some will use modular construction.

The number of apartments to be built is also interesting: 1023, being one less than 1024, as significant number in computing. The photo of an apartment used in some of the media reports is of one of the modular apartments in Laurus Wing of Ursula Hall. These are built in shipping container sized modules and each have a flat screen display linked to the university network.
Posted by Tom Worthington at 12:29 PM