This week the Minister for Families, Community Services and Indigenous Affairs, announced $48 million to fund welfare reform trials in Cape York. One area identified for support was improved housing. However, this will stretch the available pool of trained tradespeople willing to carry out such work in remote areas. One way around the problem would be to provide pre-built modules.

Prefabricated modules could be mass produced for upgrading the services in remote indigenous housing. The modules could be built in regional centres using local labor and then transported to the communities and used to upgrade existing houses or be built into new houses.

One of the problems to be addressed by the Australian Government's emergency response to the Protection of Aboriginal Children Report is housing. Even if sufficient funding was available to provide housing for remote indigenous communities, qualified trades persons would not be available to build and fit out the houses.

There have been many previous proposals for mass produced factory modular and prefabricated housing. Most of these projects have not been successful due to the stigma surrounding factory housing. In addition the prefabrication does not make major savings as scarce and expensive skilled trades are still needed on site to install water, power and telecommunications facilities in the houses. It is therefore proposed to manufacture a module which provides water, power and telecommunications services for a home. The module can then be transported to a site and installed in a new home, or retrofitted to an old one.

The technical services for a home would take about 9 cubic metres, or about one third of a standard 20 foot ISO shipping container. Rather than build the components into the smallest possible space, where they would need to then be connected to the home by qualified trades people, it is proposed to install them in a building module, providing the rooms where the services are delivered (kitchen and bathroom). In this way the services can be pre-connected to the delivery point. The empty space in the module would be used to transport components which need to be installed outside the building, such as solar panels or wind generators.

The module could use one of the many available modular building technologies to construct a unit the size of a standard ISO container for ease of transport. The module would be fitted out with a bathroom and kitchen, with fixtures and fittings included. The fit-out would be customized for different regions. Where reliable reticulated water and power are available, the building would equipped for connection. 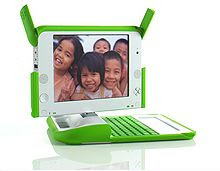 A wireless terrestrial (WiMax/3G) or satellite would be fitted. A web terminal with a rugged dust proof and reinforced screen would be built into the wall of kitchen area, along with a telephone. The computer screen could also be used for TV and monitoring the house systems. The computer systems would use an icon and voice based interface similar to the Simputer, which was designed for Indian villages and the “zoom” interface of the OLPC $100 Children's Machine for education in developing nations.

The module would be sealed against the elements (and rated for use in cyclone areas) and so habitable as a single person standalone building, for temporary accommodation. However, normally it would be built on to an existing home or into a new dwelling. Conventional building techniques or various modular and prefabricated panels could be used for the rest of the building. Because all technical services would be pre-built in the delivered module, local materials, natural timber, rammed earth, adobe and similar materials could be used for the rest of the house by semi-skilled local labor.

Specialized modules could also be produced for community facilities, such as schools, community centers and offices. These would provide more water, power and telecommunications facilities. The module walls could have integral security screens included to both provide protection for the windows during transit, as well as after installation.

Posted by Tom Worthington at 10:51 AM