Temple of the Sacred Tooth in Kandy 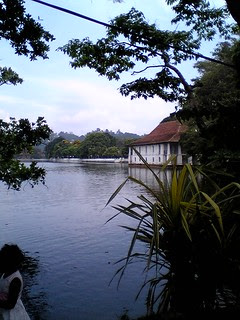 The Temple of the Sacred Tooth in Kandy, Sri Lanka, is something like the Vatican combined with the Tower of London. It is not only a center of religions worship, but control of the relic it houses is traditionally central to political power in the country. The temple has been attacked by truck bombs in the past and there are now several layers of security. But unlike in the capital Colombo, the guards appeared to be unarmed and while observing security protocols were friendly.

As with most temples in Sri Lanka, visitors are required to remove the shoes. This can be very uncomfortable for those not used to walking barefoot on hot stone (I am still recovering from burnt feet).

The Relic of the tooth of the Buddha is not seen by the visitors, just the golden casket it is held in and only for a few seconds by each visitor. What I found of more interest was the library with its palm leaf books. The leaves are long rectangles, held together with a string through two holes and with wooden covers. A stylus is used to inscribe the leaves.

Also of interest near the back entrance to the complex was the gardener's depot. Alongside a pile of clippings and a modern tractor, there was an
elephant. A thousand years ago I expect the only difference would have been an extra elephant in place of the tractor.

The complex is adjacent to Kandy Lake, an artificial reservoir, with the Biso ulpen ge (Queens bath) bathing pavillion. Unlike the Temple of the Sacred Tooth, this was deserted and was open to wander around. One section appeared to be occupied by a miniature navy, with a gray military looking power boat.; But this turned out to be the gardeners who zipped across to a small island, did some pruning and zipped back.
Posted by Tom Worthington at 3:00 PM