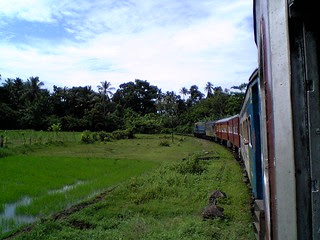 Having been on one long distance Sri Lankan train (Colombo to Kandy), the next journey was a little easier. Anuradhapura's railway station looks larger than the capital city's but there are just covered platforms behind. This makes it much easier to navigate as it is bright and airy. The Anuradhapura to Colombo serivcde has no observation car, but the normal first class carriage was comfortable enough, and had the advantage of seats facing forward.

The first class was just next to the buffet car and the staff came through offering food and drink, as well as the independent vendors at some stations. For those wanting even more catering, there are stores at the major stations. The seasoned travelers would saunter over, order food and drink and then casually savior their food, as the guard's wistle indicated the train was about to leave. They would sip the last of their beverage from the saucer (to cool it) and then casually walk over and board the now moving train.

What you mostly see from this train are rice paddy fields, worked by mechanical two-wheel tractors (with the operator walking behind). There is the occasional water buffalo team still in use. The hand hoes used today look very much like those in the Sigiriya Museum from a thousand years ago (I don't know if there are any in the Anuradhapura Museum as it is closed for renovation). Everywhere there are irrigation channels, carefully laid out to direct the water to the paddies, and as importantly, to carry it away.
Posted by Tom Worthington at 2:11 PM