Colombo to Kandy by Train 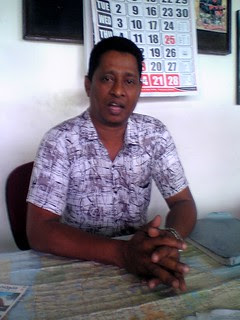 The journey from Colombo to Kandy, starts at Colombo Fort Station, the main station of the country and a large steel structure from the early 20th century. You enter from the bustle of the road outside with taxis, buses and the market opposite. The hardest part of a railway journey in Colombo is buying a ticket. The simplest for the tourist is to buy a package from Ferdinando Prasanna at the tour office in the front of Colombo Fort Station.  The next hardest part (as many places) is finding your platform and carriage. 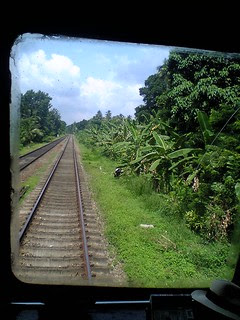 The bustling crowd seems to know where they are going, leaving the visitor lost. In this case it was not too hard to identify the observation car, as it is at the end of the long distance train and has rounded panoramic windows. What made this confusing was there was a locomotive attached to the car, but this turned out to be a shunter and was detached.

Under the platform canopy with no lights (until the locomotive was attached) the carriage was very dark. It helps to have a small flashlight to see you seat number. 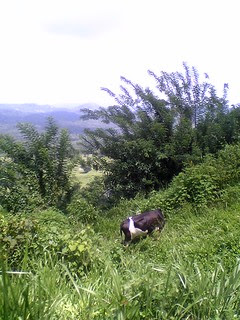 While the observation car is first class and the best seats on the train, there is no air conditioning. A switch on the wall activites a gimbal fan on the celinging, but this might produce more noise than air. The windows can be lowered, which is better than air conditioning, when the train is underway, but watch you don't catch your fingers when lowering the heavy panel. 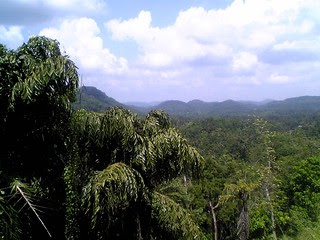 Settled in your seat you can watch the city roll by. Traveling by train you see a side of a city no visible by road. While the front of the building may be rendered and painted, often the back will be raw brick, with a lean-too of galvanized steel and, in rural areas, wattle and daub.

After a time the train leaves the city and there are fields and small towns. There is the occasional cow munching alongside the track.

Posted by Tom Worthington at 11:44 AM