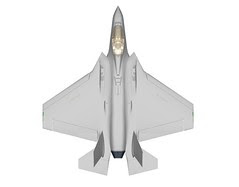 Hugh commented that a stretched fuselage and extra fuel tanks were added to single-engine aircraft fairly easily, but twin engines for the F-35 stealth multirole fighter is a major redesign. A simpler variant would have one engine, but a larger wing with greater fuel capacity for longer range and strengthened landing gear to handle the extra weight.

The resulting F-35F would be a medium bomber to replace the Australian F-111C and meet the requirements of the US Air Force Next-Generation Bomber. The aircraft would have advantages in commonality of training and maintenance with the F-35, while having three times the range.

However, the F-35F would have disadvantages. With a lower power to rate ratio, lower maximum speed and less manoeuvrability, this would no longer be a true fighter aircraft.

A single engine and single crew is unusual for a bomber. But single engine fighter aircraft with reliable engines and automation, are now routinely flown over transoceanic distances.

With modern military aircraft the problem is not so much the aircraft surviving in battle, but surviving a long development time and budget pressures, with the development of reliable electronics being a stumbling block. Building a variant of an existing aircraft with already developed and tested systems would outweigh the limitations of a derivative design. An aircraft which can be produced on time and on budget is more useful than one a decade late and too expensive to buy.
Posted by Tom Worthington at 10:16 AM