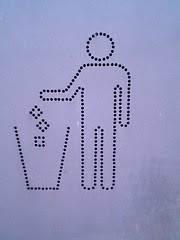 Ballast Point Park, is a new, award winning post-industrial site overlooking Sydney Harbour. It is a short ferry ride from Circular quay. The park is a former oil storage depot, converted sensitively into parkland by Landscape architects McGregor Coxall. The concrete wharf has been retained and the shape of the former oil tanks are echoed in the structures of the park.

The park features mostly hard surfaces: concrete and rock, softened by small plantings. One nice touch was the symbols for the rubbish bins (including DOT Litter Disposal) being drilled into the sides of the steel bins. This provides a vandal resistant sign, as well as echoing the industrial past of the site.

One failure are the wind turbines installed to generate electrical power for the park. These appear to be poorly positioned and a token attempt at energy reduction. A better approach might have been to fit one (or more) of the small wind turbines designed for use on yachts.

Note that you need to get off at the Balmain ferry wharf (aka Thames Street) and then walk along the foreshore to the north, over the former Mort's Dock. The main entrance to the park is on the top of the headland, but you can enter at sea level on the southern side, next to the abandoned wharf. This entrance to the park could be better signposted, as it looks like an uninviting abandoned industrial site, rather than a park from this side.
Posted by Tom Worthington at 5:31 PM