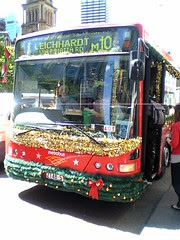 Travelling from Sydney Town hall this afternoon I noticed that the M10 Metrobus had been decorated for Christmas. Front of the bus had tinsel and imitation ivy, looking like a bus in India. The sides had more tinsel. But this did not really prepare me for the inside with with most of the ceiling covered in ivy, tinsel along each window and bows on the hanging straps. The windows had stained glass-like stickers and wall pots planted with ivy and mistletoe. The window sill opposite the back door had a row of candles in silver holders. The concertina of the articulated bus was decorated with more tinsel (which simmered as the bus moved). Top top this all off the air conditioning outlet in the ceiling was covered with a grid of shiny spinning propellers.

A sign on the bus said this was the work of the Leichardt depot staff. They perhaps let there enthusiasm get away from themselves. he decorations are well done, carefully secured and worked around emergency signs and surveillance cameras. But the weight of decoration made the bus cave like and closed in, even on a bright sunny day. Something simple might be good. The STA could institutionalise this with some stick on sheets of decorations, using the same technology as bus advertising signs.

The m10 buses are also providing free WiFi during a six month trial from 15 December 2010. Sessions can last for 45 minutes or 30MB of data use.
Posted by Tom Worthington at 5:22 PM