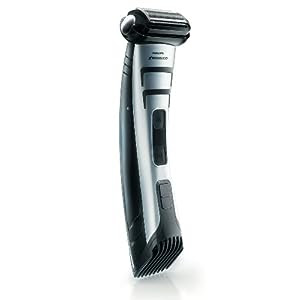 What was as interesting as the unit was the marketing approach, with instructions on how to "Achieve the optical inch" in four steps:
It took me some time to work out that these were instructions on how a male can trim their pubic hair. As it says in the Urban Dictionary:

optical inch: The extra inch of length a shaved penis appears to have over an unshaved one.

I was curious how widespread this term was. It is not in the Wikipedia and there were only about 2,000 uses of the term found in a web search.

The term seems to be used by Philips not directly on their own website, but on their more coyly named: "Shave Everywhere". A video for this entitled "Bonsai" was created for Philips by advertising company Tribal DDB, 5 May 2010.

But Philips are not the only ones providing with "Body Grooming Shavers".
Posted by Tom Worthington at 6:41 PM