Development of the transportation pictograms

The book "Symbol Signs" (AIGA, 1993) documents the development of the standard symbols for use in airports by the American Institute of Graphic Arts for the U.S. Department of Transportation. This book should be essential reading for anyone interested in the use of symbols for communication. It also provides useful insights into the way standards are developed. Because of the success of the symbol set, they seem obvious in retrospect. This book is a useful reminder of how hard the development of such standards is and how at the time the choices rarely seem obvious.

Unhappy with proposed ICAO international standard symbols, US designers (including the icon of US design, Henry Dreyfuss), lobbied for a better set. The book documents how the process was undertaken, first collecting the available existing symbol sets, sorting them into groups and examining their merits. In most cases one symbol was chosen as the best, usually with suggestions to make it bolder, simpler and more consistent with the others. In a few cases no symbol was considered suitable and work on a new one was proposed. In one case (that for an entrance) it was decided that the concept was conceptually difficult and no symbol should be used.

What the book shows mostly is the clarity of analysis. An excellent example is the symbol for an "Arriving Flight". Most airports at the time used a diagram of an aircraft heading downwards. But it was noted that this did not depict how aircraft actually land. The deeper insight was that those arriving to collect passengers did not meet a plane, but a person. So the recommendation was to use a symbol of a person waiting to be collected. 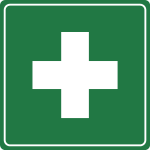 While a landmark work, the analysis is not perfect. The most obvious error in the analysis is the use of a red cross as the symbol for "first aid". While the designers rightly identify this is the best known symbol, they fail to point out that it is reserved under international law for use by the International Committee of the Red Cross. Unauthorised use of the red cross symbol is a crime. The European white and green cross is therefore now commonly used instead.

One example of a symbol which is not yet resolved is that for an exit. The US committee rejected the use of the word "EXIT", as it was little used outside English speaking countries. Instead a British Airports symbol, derived from a road sign was recommended. This shows a dark circle with a vertical light stripe (representing the path ahead is open). But far more effective for an emergency exit is the "running man" Emergency exit symbol (ISO 7001), which is now being introduced.
Posted by Tom Worthington at 8:49 AM