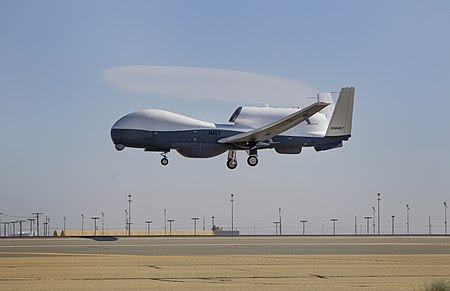 The Australian Government announced the intention to acquire "Triton Unmanned Aerial Vehicles to boost maritime surveillance capabilities" (13 March 2014). A decision on the number and timing of the aircraft will be made in 2016 after a Defence White Paper. The announcement this week appears to be designed to support the South Australian Liberal party’s election campaign,. The announcement was made at the RAAF base in SA where the aircraft will be based.

The Northrop Grumman MQ-4C Triton is a high cost, but relatively low risk, choice. Based on the successful Northrop Grumman RQ-4 Global Hawk UAV and ordered by the USA to complement the Boeing P-8 Poseidon maritime patrol aircraft (which Australia is also acquiring) the Triton has had a relatively trouble free development.
Posted by Tom Worthington at 12:36 PM