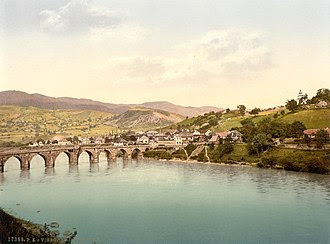 The multimedia stage show "seven kilometres north-east" is an exploration of the creator/performer Kym Vercoe’s coming to terms with discovering her tourism in Bosnia took her to sites of
atrocities. After staying at  Vilina Vlas hotel, Vercoe discovers it was a concentration camp during the during the Bosnian War.

The set design is dominated by two video projections (devised by video artist Sean Bacon) taking up the back of the stage and also projected onto washing hanging from lies above. Vercoe is on the almost bare stage for most of the one hours and twenty minutes. A few stone blocks, representing The Bridge on the Drina, are about all that are seen.

The same story is also told in the 2013 film "For Those Who Can Tell No Tales".


Sladjana Hodžić sings traditional folk songs unaccompanied from the side of the stage. This was made more haunting during Saturday night's production by several members of the audience joining in, with an echoing lament.

What makes this show is that it is based on reality. The show mentions places, people and events. The character says how they checked the Wikipedia, so I did and there it all was.

On at the Seymour Centre until 22 March, seven kilometres north-east is not a fun show (for that there is the upcoming "Anything Goes"), but it is thought provoking. One question from this is how much time must have passed until we forgive, if not forget.
Posted by Tom Worthington at 9:38 AM