Reuse or Recycle Your Old Computer

I will be speaking at Google Sydney on "Reuse or Recycle Your Old Computer", during the Sydney Linux User Group meeting,  6pm 28 March 2014. This is free to attend, but please RSVP.

Reuse or Recycle Your Old Computer 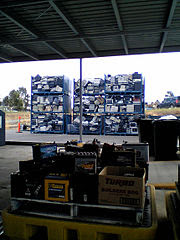 Computers and mobile devices become obsolete much quicker than other consumer products, such as refrigerators and cars. Electronic equipment can contain toxic and valuable materials which should not be simply put into landfill. Before you buy a new computer, tablet or phone, look at the options of what to do with the old one.

Tom is the author of the free ebook "ICT Sustainability: Assessment and Strategies for a Low Carbon Future" and teaches an on-line course in ICT sustainability which started at the Australian National University in mid-February.

The NTCRS and services such as MobileMuster are strictly for recycling, not reuse. The equipment is broken up into its constituent materials (plastic, metal, glass) and these are melted down for making new items. For Reuse the equipment (or parts) refurbished and used again (often by charities).

The New Zealand Government has issued reports of two studies it commissioned on how to dealing with plastic which contains Brominated flame retardant (BFR) chemicals. These plastics have been commonly used in computers and other electronic devices. The chemicals are banned under the Stockholm Convention on Persistent Organic Pollutants (POPs). The result is e-waste which is difficult to dispose of.


Backup and Erase Media Before Recycling or Reusing

Before recycling or reusing your computer, backup any useful information and then erase the media.

Computers are refurbished by volunteers, upgraded to new Windows OS and provided to those on a disability or a Centrelink card at a modest cost.